You are here: Home / Conservation / A Passenger Hawk 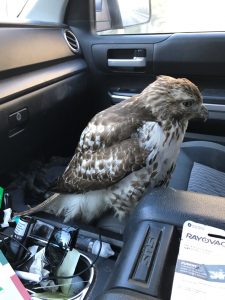 I have heard of passenger pigeons, now extinct, but I had never hear of a passenger hawk – until recently. A friend told me of a strange experience that happened to one of his friends. The man was driving on the interstate when the car in front clipped a hawk, which fell to the side of the highway. The man got out to check on the fallen bird. It seemed to be alive, but knocked unconscious. Being close to the Wildlife Center in Augusta County, the man put the hawk in his floorboard and called ahead to the Wildlife Center. They thought he said he had a hawk in his trunk, instead of truck, and the animal folks didn’t seem all that optimistic that it was actually alive, but said to bring it in.

Not long after, the hawk came to and hopped up on the console beside the driver, trying to clear its head while enjoying the drive.

When the man arrived, he called the front desk and asked what he should do and they said bring it inside. They still didn’t realize that it was a live hawk in the front seat of his car. So the Good Samaritan picked up the hawk, which put up no resistance, and dutifully took it inside.

The prognosis was that the hawk was fine, just dazed. I’m sure it’s sailing along as we speak, but will probably be a little more cautious when hunting along the interstate from now on.

Looking for Antlers In All the Right Place

I am Jim Brewer, Editor of the new CvilleBuzz, a humble on-line attempt to entertain those, not only … END_OF_DOCUMENT_TOKEN_TO_BE_REPLACED