You are here: Home / Conservation / A Beautiful Yellow Weed 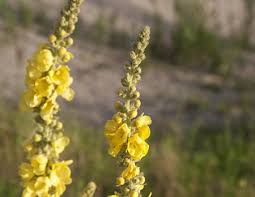 We were somewhere near the Pulaski exit on I-81 when I saw a large cluster of brilliant yellow flowers along the side of the highway. They were magnificent, yet, like many beautiful things in nature, they were just weeds. They are common mullein, a species native to Europe, Africa and Asia, but introduced to America. You wouldn’t imagine such a beautiful bloom on such a strange plant, but the beautiful weed is prominently featured in Claude Monet’s Garden at Giverny.

Mullein almost look like a cactus plant as it shoots up from the ground. It can reach heights of 6-feet and more. The plant, Verbascum Thapsus, can grow in a variety of habitats but likes disturbed soils with lots of light. It often takes off after cultivation or tilling. Farmers don’t like it, but it was once used as a common herbal remedy for coughs and other respiratory ailments. The Puritans, in fact, brought this common weed to America for medicinal purposes.

Mullein is a biennial and can be prolific with vast numbers of seeds. It is simply a gorgeous flowering plant and as Ralph Waldo Emerson once said, “A weed is a plant whose virtues have not yet been discovered.”

Next time you see a cluster of beautiful yellow flowers growing tall in a field, it’s likely mullein.

I am Jim Brewer, Editor of the new CvilleBuzz, a humble on-line attempt to entertain those, not only … END_OF_DOCUMENT_TOKEN_TO_BE_REPLACED