You are here: Home / Coming Attractions / The Cicadas are Coming 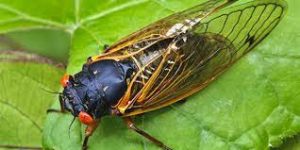 The cicadas are coming. The Brood X, or 17-year cicadas, emerge from their beds in the earth every 17 years. That’s a long nap. There are a number of different types of these locust creatures. Some pop out every 13 years and some more frequently, but these big, fat red-eyed monster-looking cicadas are due this year. Right now, actually.

They will be in parts of Virginia, but not all. If they happen to come near a river or lake near you, you’re in luck if you like to fish. If you are a fish and a big, fat juicy cicada lands in the water near you, it’s like you hit the lottery.

About 17 years ago, my buddy Dave Gladwell called me from his home in Bedford. Dave said he had a friend with a spring-fed trout pond and the fish had outgrown their confines. He wanted Dave to come catch some and take them home. What are friends for? Dave agreed and called me to help. That was an easy sell. I was there the next morning.

When we arrived at the small pond, we saw – not trout – but torpedoes cruising the pond. These were huge rainbow trout.

We threw some streamers and nymphs on the water, but the big fellas weren’t interested. They’d eyeball our flies and cruise on by. Occasionally, we’d hear a gigantic splash. The trout were eating the cicadas that landed in the water. I was fresh out of cicada patterns in my fly box, but I had something I thought might work. It was a black sculpin pattern, about 3-inches in length and it looked pretty close to the real thing. I flipped one out and bingo – a take. After quite a battle, I beached what was easily a 6-pound rainbow. I was elated. I found another sculpin and gave it to Dave. In a few minutes, his 9-foot rod doubled. He had a horse on the end of his line. The fish zipped back and forth across the pond taking line at will and making several spectacular leaps along the way. Finally, the fish tired. My net was way too small, but somehow we turned the head of the fish into the small net and pulled it in. That trout weighed 12-pounds, 8 ounces. It turned out to be a Virginia State record which lasted for several years.

So, yes. Trout like cicadas. And so do smallmouth.

I don’t think it was a Brood X cicada hatch,  but I happened to hit the James River one afternoon when cicadas were on the water. I was in a float tube drifting from Warren to Hatton Ferry, this time with a spinning rod. I saw the usual splashes as smallmouth went airborne for dragonflies, then saw cicadas on the water and the fish were going nuts. I happened to have a black Crazy Crawler, a wobbly surface plug from Heddon. I put it on and either caught a smallmouth or had a violent strike on every cast. As darkness fell on the water, the fish were still attacking the plug. I had to quit because I couldn’t see well enough to remove the treble hooks from their jaws.

A word of advice. Like every good scout, “Be prepared.” If you spin-fish, make sure to have several black, topwater plugs on hand. If you fly fish, have something big, black and bushy. In either case, be ready for a spectacular day on the water. Afterall, it might be 17 more years before you’ll get another chance like this.

I am Jim Brewer, Editor of the new CvilleBuzz, a humble on-line attempt to entertain those, not only … END_OF_DOCUMENT_TOKEN_TO_BE_REPLACED