You are here: Home / Coming Attractions / Aloha! Welcome to Hawaii 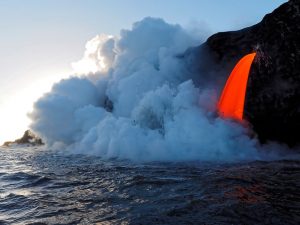 Not only is Hawaii a place of beauty, it is a geological wonder. Hawaii is one of the newest pieces of real estate in the world. The earth’s center is a hot spot. Hot enough to boil rocks. There is a place in the Pacific that– when the earth turns exactly right – gets extra hot and erupts. It first erupted years ago and it’s still spewing lava.

The depth of the Pacific in these parts can extend to 3 miles. The volcanoes that formed the Hawaiian Islands blew the crust of the earth that far and further.

No plant or animal is native to Hawaii. Everything on the islands today either came by sea, by wind or was brought here.

You would think – or at least I would think – that this big blob of black lava would be just that, big black lava, and nothing would ever grow. But the reverse is true. The lava base is incredibly fertile. Weeks after it has hardened, it is ready for growth. The trade winds of the Pacific brought plant life to the islands and things grew – really grew. We saw a shade tree on Maui that was huge in diameter. Three arm spans wouldn’t have encircled it, yet one of the plantation employees told us this tree was just 39 years old. That’s quick growth for you.

When the first Polynesians settled along the Na Pali coast in Maui, they found ideal conditions. The seeds and trees they planted sprouted within weeks. Pineapples, mangoes, papayas, coconuts, coffee, sugar, citrus trees and macadamia nuts.

Band On the Summer Run

I am Jim Brewer, Editor of the new CvilleBuzz, a humble on-line attempt to entertain those, not only … END_OF_DOCUMENT_TOKEN_TO_BE_REPLACED