You are here: Home / Columns to Remember / Life On a Pier 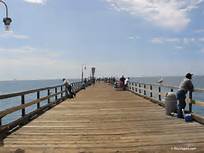 If by the grace of God, I am given a free and undeserved pass to heaven, I expect to meet St. Peter – not at the Pearly Gates – but on the entrance to a fishing pier and greeted this way.

“Here is a Penn rod and reel, Jim. You can spend eternity on this pier and the fish are biting.”

I am truly happy on a pier, most any pier, and it’s been that way since I was a child, fishing at Atlantic Beach, NC. My parents would often drop me off in the morning with a bucket for the fish and a pound of shrimp, and unless I ran out of bait, they had to drag me off the pier to get me back to the cottage in time for supper.

Last week, I was able to sneak away to Nags Head, and after getting pounded by the waves trying to surf fish, I was able to spend one pleasant afternoon dunking cut mullet and blood worms off the side of Outer Banks Pier.

The fellows at the end of the pier were casting plugs and spoons and catching some nice bluefish and a few Spanish mackerel. But making a hundred casts for each hookup seemed like a lot of work to this angler. I was on vacation and decided to bottom fish, and let the fish do the work. If they wanted my bait, let ‘em find it.

And they did, but they were mighty small specimens. Each time I released the spool and let the bait and sinker plunk to the bottom, I had a strike, but most were three-inch hogfish. Finally, a couple of speckled trout beat the little fish to the bait, but they were less than 14-inches and I had to throw them back. My goal was to somehow catch enough fish that Nancy and I could make a couple of fish sandwiches for supper, but it would take a lot of three inch fish for even an appetizer.

A decent spot finally hit my bloodworm and found his way into my cooler and then a fat sand perch followed suit.

Then, the rod tip went down in a serious way and whatever was on the end of the line was way bigger than 3-inches. It turned out to be a decent flounder, a 17-incher. Dinner was secured.

For me, fishing from a pier provides more than a meal, it is an opportunity for fellowship – I made three new friends that afternoon. It also provides a way to absolutely unwind, to look out over the ocean and marvel at creation.

But it is nice when the fish are biting, and in heaven, it will be every cast.

I am Jim Brewer, Editor of the new CvilleBuzz, a humble on-line attempt to entertain those, not only … END_OF_DOCUMENT_TOKEN_TO_BE_REPLACED