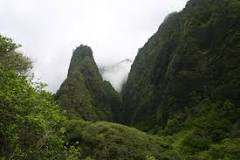 We packed a lot of action in our two day layover in Maui. We had not booked any of the cruise excursions because we didn’t know how long it would take us to recover from our trip.

So about mid-morning the first day, we ventured from the ship and found a bus called Hula Hopper run by a few locals. We signed up for a tour on both days and truly got our money’s worth.

Our first stop was along one of the surfing beaches south of Lahaina. Our guides let us out for a leisurely stroll back up the beach. This is where I got a first-hand taste of the power of the waves that draw surfer gals and guys. I took off my shoes and walked to the edge of the water, maybe ankle deep. While I was standing there – minding my own business and enjoying the 70 degree water lapping at my feet – a Tsunami-like wave from Japan barreled across the surface and plowed into me waist high. It almost knocked me over, and remember, I was barely ankle deep. I made my way quickly back to dry land, soaked to the bone. We continued our walk admiring the trees and plants with a newly found respect for this part of the Pacific Ocean.

Following the stroll along the beach, we toured a Sugar Cane Museum which depicted life on the plantations and the process of converting sugar from 20-foot stalks to refined granules. That’s a lot of work. It takes 6 feet of cane stalks to produce a single sugar cube.

We also made a stop at the Maui Ocean Center, an amazing aquarium depicting the beautiful fishes and underwater life of the Pacific. The fish were beautiful, much more colorful than their cousins in the Atlantic. We were then treated to a 3D show starring humpback whales. At times the whales seemed so close you could reach up and touch their fins. They are truly incredible animals.

The second day on Maui we stopped at a Memorial Park dedicated to the workers who tilled the cane fields. Memorials were established for Portuguese, Chinese, Japanese and other nationalities that formed the nucleus of workers. It was most inspirational.

Next, our tour bus ascended into hallowed ground, at least by Hawaiian standards. We drove up into E’aio Valley, the site of royal burials in early Hawaiian culture.

As for this hallowed ground, the early Hawaiians believed that the essence of their being, their “mana”, was found in their bones, not flesh. For burial, the bodies were boiled leaving only the bones which were then buried deep in this valley. The people also believed in Pele, the goddess of the volcanoes, the source of their earth. Pele, it’s said, considered the earth to be her own. Every single pebble was one of her children. And anyone who removed even a stone from this sacred ground was cursed. Those that did became sick, they lost their jobs, their cars were stolen and they met with great misfortune.

The tour through the E’aio Valley starts at basically sea level and rises to a half mile in short order. We went about halfway up the mountain. You could feel the climate changing as we quickly ascended. The undergrowth was rich and lush with untold numbers of plants and trees. A cascading river plunged down the steep incline. It was beautiful.

We returned to the ship that afternoon to depart for Hilo on the Big Island, but before we left I made damned sure I didn’t have any of those pebbles with me.

A Garden Full of Fish

Lei One on Me

I am Jim Brewer, Editor of the new CvilleBuzz, a humble on-line attempt to entertain those, not only … END_OF_DOCUMENT_TOKEN_TO_BE_REPLACED