You are here: Home / Chuckles / The (Practical) Joker 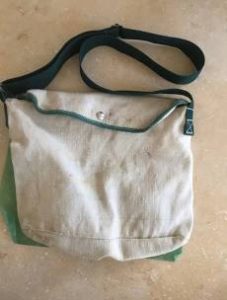 Some would say that I am a practical joker. I like to play unexpected pranks, especially on my closest friends.

Wayne Haga, a CPA from Princeton, WV, was a long-time campmate of yours truly. For over 35 years, a group of us including Wayne have gone camping twice a year. Wayne was also a regular patron of the local Trout Unlimited Fund Raising Banquet which I frequently organized. One year, Wayne bid on and won something called an Arcti-Creel. An Arcti-Creel is a creel in which to put trout, and if you keep it wet by submerging it in the stream, it keeps your trout cool and fresh.

Wayne adored his ArctiCreel. It was one of his most prized possessions. He even wrote “Haga” on the outside of the canvas bag with a magic marker, as most of the rest of us had one, too.

One spring, as we de-camped, Wayne misplaced his ArctiCreel. He couldn’t find it when he unpacked all his gear. Distressed. he called each of us to see if we may have taken it by mistake. I went downstairs where I stored my camping gear and I had mine, but didn’t see his.

But then, the next fall as I was packing up, I found Wayne’s creel among some of the stuff I had stored at my sporting goods shop.

Naturally, it wouldn’t do to just take Wayne’s creel to camp and give it to him. That would be the “unpractical joker’s” thing to do, and I am – after all – a practical joker.

So I got a magic marker and X-ed out “Haga”, then wrote “Brewer” over his name.

When we got to camp, I slipped out the creel from my gear and hung it on a nail on a tree in the middle of camp. Wayne had made about three trips beside the tree with the creel when he finally noticed.

He screeched to a halt, leaving skid marks in the leaves when he saw the creel on the tree.

“That’s my ArctiCreel,” he wailed.

Wayne then more or less raised hell for about 10 minutes. The rest of us, who knew what was going on, laughed our collective asses off.

It was one of my better practical jokes.

Hunting On A Major Highway

I am Jim Brewer, Editor of the new CvilleBuzz, a humble on-line attempt to entertain those, not only … END_OF_DOCUMENT_TOKEN_TO_BE_REPLACED