You are here: Home / Chuckles / The Bird Game 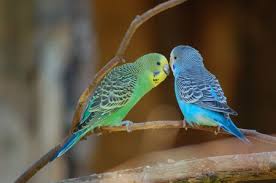 Nancy and I are playing the “Bird Game.”
Let me explain.

During our marriage we have had cats, English Setters, beagles, mutts, rabbits, gerbils, fresh and saltwater aquarium fish, turtles, ferrets and frogs. A few years ago, we got our first birds. A friend of Nancy’s told her told about two love birds that had lost their original owner and were now confined to a basement in a room without natural light. Naturally, Nancy went out, bought a hundred-dollar cage and adopted the love birds. They were older birds, and wouldn’t live that long, she was told,

Well, they didn’t. One died in about a year and the other followed suit a few months later. We then had no birds, just a hundred-dollar cage. Then, another “friend” found a parakeet in the road in front of his house that had obviously escaped and was basically helpless. He captured the distressed bird, couldn’t find the rightful owner, and somehow discovered that we had a room for rent – an empty cage. One call to Nancy with a sob story and now we were back in the bird business. The little parakeet, we named him Brother Bill after his captor, seemed fine, chirping away at the various make-believe friends in his mirrors, but Nancy thought he might be lonely. So she bought another parakeet, Snowbird, a young female who proceeded to make Brother Bill’s life a living hell. Then Brother Bill died, leaving another solitary parakeet.

Every day, Snowbird looked longingly out the window, seeing the finches in our front porch feeder and shedding lonely, little parakeet tears.

This past weekend, we drove to Fredericksburg to get a foster parakeet, we named her Foster, to keep Snowbird occupied. Foster is supposedly a mature bird and we are hoping that our two parakeets will both die on the same day. Otherwise we will continue playing the Bird Game.

A word of advice. Never keep an empty bird cage.

Hunting On A Major Highway

Breaking In A Hunting Car

I am Jim Brewer, Editor of the new CvilleBuzz, a humble on-line attempt to entertain those, not only … END_OF_DOCUMENT_TOKEN_TO_BE_REPLACED