You are here: Home / Chuckles / Pour Off the Grease 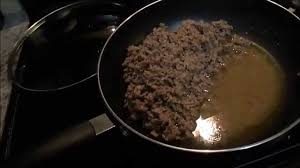 Sooner or later if you happen to be cooking, you’ll come across these instructions: Pour off the grease. This happens, for instance, when you brown hamburger. The burger gets brown but the grease just sits there and says, “Now what?”

You will now be required to pour off the grease from the pan so your spaghetti sauce will not clog half the arteries in North America. But that’s not as simple as it sounds. First, you’re dealing with a large, hot pan, maybe even an iron skillet weighing ten pounds and you struggle to tilt it to one side so that the scalding hot grease can dribble its way over the edge of the skillet and into an awaiting receptacle.

This is all well and good if the hamburger followed the instructions and stayed in the skillet while the grease miraculously escaped. But it doesn’t.

After multiple occasions of getting grease and loose hamburger all over the kitchen counters, I had a brilliant idea. Nancy has a baster thing that sucks up juice, then deposits it on a turkey or whatever when you squeeze the bulb. So I inserted the tip of the baster into the hot grease and as I was attempting to re-squeeze it into another bowl, the baster let loose early in something of a premature ejaculation that went all over the counter tops. Cleaning a spilled pint of hot grease before your wife sees it is not the easiest task for a would-be chef.

Since the hot grease also melted the rubber squeeze thing on the baster, that plan was out for keeps. But how about if you tilt the pan to one side and let the grease go to the end of the skillet and then scoop it out with a tablespoon? If you have an hour to kill, that works sort of, but you will still have some grease to pour off and the hamburger wants the same treatment.

I finally gave up and have since been pouring the grease and the rogue hamburger meat into a large bowl then retrieving the escaped hamburger with a slotted spoon.

If there is a better solution, I’d sure like to hear about it.

Breaking In A Hunting Car

The Name is Bond, James Bond

I am Jim Brewer, Editor of the new CvilleBuzz, a humble on-line attempt to entertain those, not only … END_OF_DOCUMENT_TOKEN_TO_BE_REPLACED