You are here: Home / Chuckles / My Mister Rogers Sweater 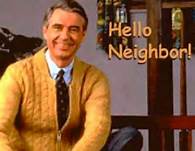 Outdoorsmen are not known as natty dressers. You hardly ever see any of us in GQ magazine, or any other magazine for that matter – except maybe Field & Stream and Outdoor Life. When camouflage is your favorite color, you are not runway material for Fifth Avenue fashion shows.

An outdoorsman is more of a practical dresser than a fashion buff. An old flannel shirt with most of the front buttons is fine with us. Sleeve buttons aren’t all that essential since you can always roll your sleeves up if they start dragging through the deer stew. And a pair of Levi’s is about all you ever need in the way of britches. If an outdoorsman is dressing up and wearing a sport coat to a dinner party or something fancy, you can always wear a new pair Rocky Boots.

My children, however, do not always approve of my dress code. My eldest daughter just about fainted when I wore a camo cummerbund to her wedding.

It happened one Christmas that I was exchanging with a fellow outdoorsman named Ruff N. Reddy. His real name was Delbert N. Reddy, but we always called him Ruff N. Reddy because he would have shot anyone who called him Delbert. And Ruff was a good shot, too.

Delbert, I mean Ruff, was in dire need of a new pair of hunting pants. The ones he wore on our grouse hunts were probably a 32 waist. Ruff had a 32 waist when he was a baby. A size 42 was more like it now and that’s what I gave him. Got ‘em at Bass Pro in his favorite Woodland camo pattern. He was so happy, he cried. He wears them every day, which is a little unusual for a mortician.

But the gift he gave me far exceeded the one I gave him.

When I opened my gift, it was an official L.L. Bean wool cardigan sweater with a zip up front. It was in my favorite color, too – “poo poo” brown. I tried it on and it glided over my body. The sweater was perfect in every way – meant just for me. I loved it and wore it all the time, even in the summer, until it mysteriously disappeared. I’m not totally sure, but I think it was a conspiracy involving my children.

My daughter Laura thought I looked like Mr. Rogers when I wore it. I took that as a compliment, but she apparently thought otherwise.

One afternoon I picked her up after school and took her shopping for some school materials. Once inside the store, Laura spotted some of her friends and tried to distance herself from me and my Mr. Rogers sweater. I finally found her, though, chatting with her classmates when I approached and said, “Hi! I’m Laura’s dad.”

Laura stood there with a deer-in-the-headlights look and her friends stared intently in my direction. I am a rather fetching fellow if I do say so myself, but I’ve never been stared at in that way. I tried to carry on a conversation, but the kids were speechless. They finally each hugged Laura and left shaking their heads.

Laura didn’t speak to me for about a week, which is about when my sweater disappeared. She was cheerful and pleasant from that day forward. Each Christmas now, she gives me lots of fancy shirts and V-neck sweaters. But I still miss my Mr. Rogers sweater. Sometimes when I’m feeling especially sad, I’ll go downtown and ask total strangers if they’ll be my neighbor.

I am Jim Brewer, Editor of the new CvilleBuzz, a humble on-line attempt to entertain those, not only … END_OF_DOCUMENT_TOKEN_TO_BE_REPLACED