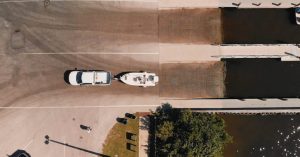 Sportsmen face many obstacles in their outdoor careers. Driving a Jeep down a muddy, rut-filled logging road deep in a grouse covert comes to mind. But that’s not the most difficult challenge. Stepping squarely on a hornet’s nest while creeping in on a spring gobbler is no walk in the park, but worse can happen. An outdoors type might even find himself or herself between a mother bear and her cubs while fly-fishing a mountain stream. Now that’s a genuine problem, but it’s nothing like the toughest obstacle a sportsman will ever confront, and that’s backing a boat down a narrow ramp while dozens of others are watching and waiting to do the same.

My first experience at putting a truck in reverse and attempting to maneuver a 22-foot bass boat weighing approximately the same as an adult hippopotamus down a boat ramp and safely onto a lake occurred at Anna Point Marina. It was a frigid March morning and I had been talked into participating in a bass tournament. All 20 teams arrived at the marina at about the same time.

They were now lined up in the parking lot, boats, trailers, trucks and fishermen, all waiting their turns to back their bass boats into Lake Anna. My partner, Dr. Tunk Tegtmeyer, owned the Ranger boat in which we would be fishing. It had all the bells and whistles, and cost about twice as much as my first house. Therefore, the good doctor did not trust me to sit in the captain’s chair as the craft was being launched. Rather, he instructed me to get in his truck and back the rig down the ramp into the water. He said that he would let me know when we had backed the boat far enough that it would then float away from the trailer and dock.

As it turns out, I had never before pulled a bass boat forward with a truck, much less backed up with such a beast in tow, but how hard could it be?

The good doctor was now in the boat, and all the guys were watching and waiting as I began my descent down the ramp. Glancing over my right shoulder and noting that this ramp was not nearly as wide as I first thought, I inched my way toward the water. Unfortunately, while I was looking over my shoulder back at the lake, the boat and motor were headed to the left side of the dock at about a ninety-degree angle, give or take 2 or 3 degrees.

Hearing shrieks and screams, I hit the brakes, noting that the boat motor was within 6-inches of taking out the dock on the right side of the ramp.

No problem, I thought. A minor error in judgment. I pulled forward, straightened out the truck and trailer, glanced over my left shoulder this time and proceeded to send several bystanders scattering for cover on the right dock beside the ramp.

A crowd began to gather – men, women, children and dogs. I think the manager of the marina was selling tickets.

“Put your hand on the bottom of the steering wheel, and which ever direction you turn the wheel, that’s where the trailer will go,” a bystander yelled.

That made sense, sort of.  Slowly, steadily, I zigged and zagged my way down the ramp and entered the water at no worse than a 45-degree angle, but what’s a few degrees among friends. Miraculously, the docks on both sides of the ramp were still in tact.

I received a standing ovation as the boat floated safely off the trailer and into the lake. Tipping my cap to my adoring fans and followers, I pulled forward and parked the truck and trailer safely in the lot.

So, fellow sportsmen, backing a bass boat down a ramp without devastating consequences is, in fact, the most difficult challenge of all, but somehow I did it.

Funny, but after that, I always sat in the boat while the doctor backed the trailer down the ramp. New docks can get expensive.

There’s An App For That

I am Jim Brewer, Editor of the new CvilleBuzz, a humble on-line attempt to entertain those, not only … END_OF_DOCUMENT_TOKEN_TO_BE_REPLACED