You are here: Home / Chuckles / Fear The Freezer 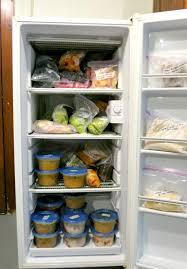 It was the summer of 1973 and we had made close friends with Donald and Janice Ramirez from church. We ate at each other’s house, went out to eat together and had kids about the same age. It was destined to be a great friendship. They had even asked us to watch over their house in Woodbrook while they spent a week with family back in New Orleans.

“I’d be delighted to feed the fish and the cats and keep a watch on things,” I assured.

Right before Janice and Donald left, they said that the house across the street had just come on the market. The day after they left, Nancy and I – we lived in Berkley at the time – went to see the lovely brick home, found it to be ideal. We made an offer and they accepted.

Wait till Janice and Donald get back and find lout we bought it! Boy, will they ever be surprised.

Somewhere around the middle of the week while I was feeding their cats, I remembered Donald having said they had just bought a side of beef. I had been thinking about doing the same, but wondered if I’d have enough room in my freezer. Their freezer, about the same size as ours, was in the basement, so I went down to check it out, to see how much space they had left.

The freezer door needed a little coaxing to open and I saw that they had much of their freezer filled, but there was still some room at the bottom.

Then I tried to shut the freezer, but I couldn’t. It had been locked and was still locked, that’s why it needed a little “coaxing.”

The key! I had to find the key! Certainly it was on top of the freezer, but it wasn’t. I searched the basement high and low and no key.

The precariousness and total embarrassment of this situation began to sink in.

First, all the beef in Donald’s freezer would certainly thaw and rot before they came back. How was I going to explain that I had forced their freezer open and now I was their new neighbor? I thought about taking all the food from their freezer and putting it in mine, but that didn’t sound good, either.
This was looking bad.

I ultimately decided to try to secure the freezer myself. First, I shoved a piece of furniture against the door in attempt to seal it, then I put blankets around the seams and hoped for the best. I checked on the freezer the next day and the food was still frozen solid. That was good, but I still had some “splaining to do.

When the Ramirez’ returned – I had almost hoped they wouldn’t – Janice called and said they were home, but noticed a “Sold” sign on the home across the street.

I said there is good news and bad news. The good news was that we bought the house, but that was also bad news because their new neighbor had broken into their locked freezer while they were away.

After I made my feeble explanation, everyone had a good laugh, all was forgiven and we had made wonderful years of friendship together. We camped together, Donald and I hunted and fished together and we ate numerous meals together.

We became such good friends that Donald even offered an extra key to his freezer, but I said that wouldn’t be necessary since I now knew exactly how much space a side of beef would occupy.

A Garden Full of Fish

Lei One on Me

I am Jim Brewer, Editor of the new CvilleBuzz, a humble on-line attempt to entertain those, not only … END_OF_DOCUMENT_TOKEN_TO_BE_REPLACED