You are here: Home / Chuckles / Coffee Mate, Anyone? 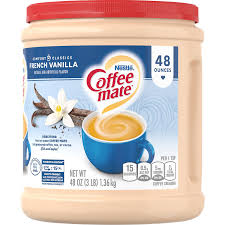 Fifteen minutes later, I was in my car headed to the closest grocery store, which happened to be a Food Lion. When I arrived, I found a whole lot of other folks who also thought they might be canceling grocery store visits because of this cursed virus.

My thought was to buy enough basic foods to last about three weeks. I figured that wasn’t a bad idea anyway – have some extra food around, just in case.

So, what basic foods should you stock, other than beer, of course? That’s a given. I went for canned stuff – green beans, peas, even carrots, and I hate canned carrots. I bought enough fruit cocktail to avoid scurvy throughout a Seven Year War and added basics like flour, sugar, tuna fish, Spam, beef stew and canned chicken. I had a grocery cart overflowing with non-perishables: stuff I will likely end up donating to the Food Bank in the coming months. I also bought a couple huge boxes of cereal since Nancy likes cereal for breakfast.

Then it dawned on me. Cereal requires milk and how will I get milk for Nancy’s cereal if they close the stores?

I happen to be old enough to remember powdered milk. Back in the 50’s they tried to convince us that powdered milk was the cat’s meow – the coming thing. It wasn’t of course. The stuff was awful, but I supposed it would be better than no milk at all if they shuttered all the Food Lions.

But they were even out of powdered milk!  I was now in full panic mode, my mind in a fog. What else could I substitute for milk? And then I saw a counter with coffee creamers. Creamers are like powdered milk, I deduced. If I added just the right amount of water, maybe I could convince Nancy that it was milk. So I bought a giant tub of Coffee Mate. When I say giant tub, I mean about half the size of a propane tank for the gas grill.

This will make a lot of milk, I thought.

Two days after my shopping binge, I discovered that the Kroger’s  right across the street from my house had plenty of fresh milk and that it appears they will not be closing the grocery stores, after all. I am now the proud owner of enough Coffee Mate to cream all the coffee for two battalions of U.S. troops, and I drink my coffee black.

If anyone has any good recipes involving Coffee Mate, I would be much obliged.

Tired of All the Rain?

I am Jim Brewer, Editor of the new CvilleBuzz, a humble on-line attempt to entertain those, not only … END_OF_DOCUMENT_TOKEN_TO_BE_REPLACED