You are here: Home / Chuckles / Camping and the Average Man 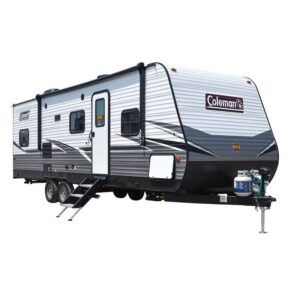 During the life of an average man there comes a few times when he takes complete leave of his senses and does incredibly stupid things – like go camping. After rising to the top of the food chain and having access to things like heat pumps, wide screen TVs and multiple jet showers, some average men deem it desirable to forego the pleasantries of life and live among a cluster of other humans within the confines of a cramped travel trailer or even worse, a tent.

This average man tried tent camping long ago and concluded that it was a lifestyle better left to nomads and native Americans. Tent camping is tolerable as long as the weather is perfect – a soft breeze, sunny skies and temperatures in the low 70’s. But when a nor-easter levels your tent a few minutes before the monsoons create a river over, around and through your campsite, followed by a scorching sun which pushes the thermometer well into the 90’s and stirs every stinging and crawling beast into attack mode, tent camping is not so much fun anymore.

Camping in a travel trailer is better, like having only one wisdom tooth cut out of your jaw is better than having all four removed at the same time. One problem with camping trailers is in their ability – or lack thereof – to move toilet waste from the trailer itself into the sewer line in an efficient manner. For this average man, even thinking about toilet waste is repulsive. Being actually in and among it was most unpleasant. It happened this way.

Several of the ladies within this average man’s trailer had a propensity to use lots of tissues after doing their business – if you know what I mean. And the sewer line clogged. When sewer lines clog and you’re camping, the ladies responsible for the clogging apologize profusely, then go to the beach and lie in the sun while the average man tries to figure out what to do.

On the outside of a travel trailer is a connection where the sewer hose hooks up to deliver the goods to the sewer itself. After poking around, this average man discovered that none of the (shudder) waste was making it to the sewer hose, so he foolishly disconnected it from the trailer. At that point, about 10 gallons of waste made a rapid escape from the holding tank and pelted this average man with an assortment of missiles. That was bad, but worse was having to capture and retrieve the numerous missiles scattered around the campsite.

The average man can also be exposed to most embarrassing situations during a camping trip involving trailers. It happened that just last summer a certain average man rented a camping trailer in advance of the arrival of his daughter from California. The rental trailer was on-site, one of a half-dozen of exactly the same trailers lined up, side by side. It’s relatively easy to identify which trailer is yours during the day, but at night, it’s a different story.

It happened on the first night – after the average man and his wife had retired for the evening – that some campers across the road had set up a 20-foot screen outside their trailer and were watching the Incredible Hulk Levels New York City with the volume raised to the level that those as far away as New York City would have asked, “Please turn it down.”

After tossing and turning and thinking “How could anyone be so rude as to play a video that loud and that late?” the average man pulled on his tee shirt, slipped into a pair of shorts, and stormed the enemy campsite, ready to do battle if necessary.

It turned out to be a half dozen kids watching the video, the oldest about 10, and the average man informed them that if they didn’t turn that thing down, he would. But they did.

Still fuming, the average man went back to this trailer, took off his shirt and shorts in the dark and told his wife, “It was just a bunch of kids.”

I am Jim Brewer, Editor of the new CvilleBuzz, a humble on-line attempt to entertain those, not only … END_OF_DOCUMENT_TOKEN_TO_BE_REPLACED