You are here: Home / Boomer Memories / Whittle While You Work 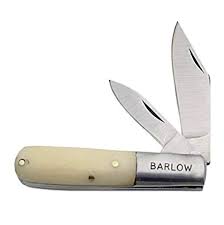 For Boomer kids, pocket knives were essentials. By second grade, every young boy had one. And they weren’t toys. They were real knives.

My first one of many (I lost them on a regular basis) was a barlow. Afterall, Huckleberry Finn had one, and so did I.

When things were slow, with no pretend army or navy battles underway, we broke out our barlows and whittled. Mostly we whittled small sticks and twigs, sharpening the points as if to make pretend spears. Sometimes we got a piece of scrap pine and began carving it into exactly what, we weren’t sure. We just carved the big piece of pine into a smaller piece of pine.

I remember in the fall, Billy Richmond had two huge oak trees in his front yard that rained down acorns the size of golf balls. With our trusty knives, Billy and I carefully removed the top of the acorn, dug out the insides, cut a small hole in the side of the nut, inserted one of our whittled spears and made make believe pipes. On a slow afternoon, we whittled up dozens of pipes.

There was also a mud bank near the high school football field that held a lode of soapstone, or that’s what we called it. It was soft but held its shape and made for great carving. We spent hours whittling away at the soapstone with no particular work of art in mind. We just whittled.

Sometimes we played Tarzan and imagined our barlows as jungle knives. We stood back a few feet from a tree and sent our knives head over heels into the tree bark. Sometimes it stuck, but usually, the wrong end hit first and bounced off the tree.

We took our knives to school, to church and most everywhere we went. You never knew when you might need your barlow.

Several companies claimed to be barlow manufacturers, including one from England, but barlow was first of all a style of pocket knife. The barlow had one or two blades, a large metal bolster and a tear-dropped shaped handle. They say George Washington had a barlow. Maybe that’s what he used to cut down the cherry tree?
In the United States, the Barlow Company began manufacturing pocketknives in the 1930’s and offered a lifetime warranty. They stopped that in 2003 – I suppose too many youngsters broke off the blades trying to stick their knives in tree trunks.

Today, a parent would freak out at the thought of his or her child with a pocket knife. And a school principal would send for a Swat Team to wrestle down the knife owner and disarm the young terrorist. And Lord knows, don’t ever try to carry even a small pocket knife aboard an airplane.

But way back then, we never considered using our pocket knives for any evil purpose. All we wanted to do was whittle.

I am Jim Brewer, Editor of the new CvilleBuzz, a humble on-line attempt to entertain those, not only … END_OF_DOCUMENT_TOKEN_TO_BE_REPLACED