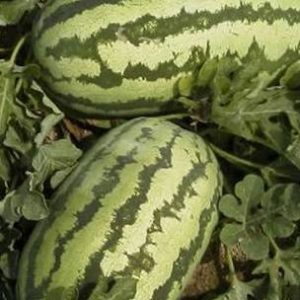 But give me, oh give me,

I really wish you would

That watermelon hanging on the vine

My Daddy used to sing that song when I was a boy. I don’t know if it was an actual, recorded song, or something he just made up, but he sang it frequently around the house, particularly in summer and particularly when we were having watermelons.

People still eat watermelons, sometimes in a fruit salad, sometimes as a finger food or an appetizer. The most popular size watermelon today is a small, seedless “personal size” watermelon,  about the size of a volleyball. They are easy to store, easy to carve and fit conveniently in a grocery cart.

Boomers ate huge watermelons filled with black seeds, which added to the fun. For Boomers, eating a watermelon was more than just food. It was a grand, social occasion.

Around the first of July when watermelons came in season – they were all locally grown then, no Mexican imports – someone in the family or neighborhood would buy a huge watermelon and prepare it on a picnic table. The melon was sliced in half horizontally, then sliced into quarters. From the quarters, smaller slices were carved down and through the rind. Each Boomer kid got a big piece of watermelon, which we devoured. Spitting the seeds at each other added to the enjoyment. We ate the melon down to the rind and were often warned to gnaw no further or else get stomach cramps. I remember sticky watermelon juice running down chins and arms and on exposed bellies if it was hot outside and we went without shirts.

Watermelons were a big hit at church picnics and family gatherings. Because of their size, it was imperative that lots of people took part in the eating and carving, otherwise the huge melons were difficult to store.

Daddy was born and raised on a farm in Eastern North Carolina. He told us about frequently going out in the watermelon patch with all the hired hands, finding a ripe melon and busting it wide open on the spot, with each worker enjoying a refreshing piece on a hot summer day.

I did that once on a visit to Grandma Brewer’s house. We dropped a melon, split it open and we ate until I thought I would blow up.

Last week, for old time’s sake, I bought a big watermelon at Sam’s Club. I carved it like in the old days, and you know what? Watermelons still are mighty, mighty fine!

Working On A Tan

The Golden Age of Television

I am Jim Brewer, Editor of the new CvilleBuzz, a humble on-line attempt to entertain those, not only … END_OF_DOCUMENT_TOKEN_TO_BE_REPLACED