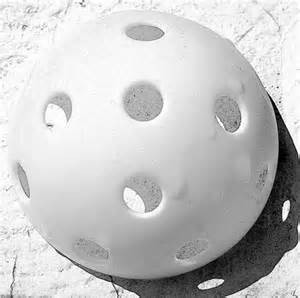 Today, it’s hard to imagine a world without plastics. But plastic products really hit their stride in America after World War II. Before that, the war machine consumed many of the organic materials necessary to create plastic. In the 1950’s, plastics went viral.

In the late 1950’s, a product called a practice golf ball hit the store shelves. It was a small, white plastic sphere studded with strategic holes that created air resistance. The purpose was to limit the distance the plastic ball would go after being struck by a golf club. That way, the golfer could practice and not have far to go to retrieve his balls. But as the Boomer kids quickly discovered, the small, golf-size balls could also be converted into miniature baseballs, or “whiffle balls” as we called them.

Boomers kids played outside, whenever possible, and we played with each other, not with electronics. We played football in the fall, basketball in the winter and baseball from the time the snow melted until the outcome of the World Series was settled.

A game of pick-up football could be played with two in a punt, kick and drop kick competition, but two on a side worked better. Then one kid could go deep. Basketball could be played with two, in a game of H.O.R.S.E. or one-on-one, but it was really hard to play baseball with less than 4 or 5 on a side, and rounding up 8 or 10 kids after school was often difficult, if not impossible.

Whiffle ball allowed a spirited game of baseball with as few as 4 players, or even 2 in a game of home run derby. One of my fondest memories was a backyard game of whiffle ball with homemade bats carved out of pine wood and wrapped with electric tape.

One of the great things about a whiffle ball was that even an ordinary pitcher could throw a devastating curve ball, and if you pitched the balls with just knuckles, it would dip and dart like the very best Hoyt Wilhelm knuckleball.

Creating a field was also fun. Our first home on Court Street in Lewisburg, WV allowed us to use the house as the left field wall, with an open centerfield area and tall pines in right. Then we moved to Buckingham Acres across town, which presented us with a genuine (dog pen) fence in right field. It was like Yankee Stadium where would-be Hank Bauer’s could back up to the fence and making leaping one-handed catches. The only problem was that if the ball cleared the fence and settled in the dog pen, there were three of dad’s English Setters waiting to retrieve, and they didn’t give the slimed balls up easily.

We played whiffle ball for hours and hours, week after week. We kept scores and had pennant races. The thrill of batting left handed and blasting a ball over the right field fence was exhilarating. Whiffle ball was a wonderful game during a wonderful time to be a youngster in America.

Today, there is T Ball, and 8-10 year old leagues, Little Leagues, Babe Ruth leagues and so on. But you never, ever see 3 or 4 kids out playing ball without uniforms and adult supervision. Today, a child wouldn’t know what a whiffle ball was, nor care, and that’s a shame.

I am Jim Brewer, Editor of the new CvilleBuzz, a humble on-line attempt to entertain those, not only … END_OF_DOCUMENT_TOKEN_TO_BE_REPLACED