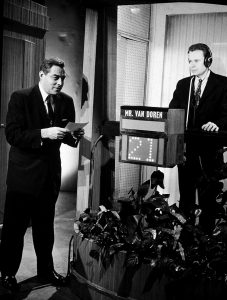 In December 1956, all of America was glued to a TV set. On Monday nights at 8 pm on NBC, the game show Twenty-One was on the air. It was the All-American boy, Charles Van Doren, in one isolation booth and Herb Stempel, a dorky genius in the other. Everyone in the country except Stempel’s mother was rooting for Van Doren, the Columbia University scholar, to win. And he did, with a little help from his friends.

The game Twenty-One was basically a trivia show with two contestants competing. The host, Jack Barry, announced the category, like Sports or European History and the contestants decided the difficulty of the questions (from 1 point being easy to 11, the most difficult). Whichever contestant reached 21 first was the winner, and the prize money – for that time – was significant. Van Doren, for example, would amass $129,000 during his reign. That compares to nearly $1,200,000 in today’s dollars. Considering that you earned only $50 if you said the Secret Word on the Groucho Marx Show, that was real money in the 1950’s.

Twenty-One was the first quiz show to offer big payouts, but it was a bust as far as ratings went in the early going. Many contestants couldn’t answer the easy questions.

Geritol, the sponsor, was furious after the initial broadcast and demanded better results or no sponsorship. As a result, the show was not only rigged, it was choreographed. Contestants were cast as actors, given instructions on everything from how to dress and speak, when to mop their brows and what the answers to the questions were.

But America didn’t know that. All we knew was that Charles Van Doren had played to three ties with Stempel. Could he win against this remarkable adversary, or not?

Finally, Van Doren prevailed as Stempel blew the answer to the question of who won the Academy Award for Best Motion Picture in 1955. It was “Marty”, Stempel’s favorite movie, but he deliberately flubbed the answer and Van Dorn won.

The suspense created caused Twenty-One to soar in the ratings, actually surpassing I Love Lucy, the gold standard in ratings for a television show.

Van Doren became a super star – featured on the cover of Time Magazine and offered numerous academic positions as well as television and movie opportunities. He remained modest to a fault.

When it finally came out that Van Doren had been given the answers in advance, all the air went out of America’s balloon. It was hard to take, hard to believe. In the years to follow, game shows for money became pariahs. Nobody would touch them, nobody would watch.

A few years ago, Who Wants to be A Millionaire soared in the ratings but it was no match for the unbelievable popularity of Charles Van Doren and Twenty-One some 50 years before. We were there. We watched. All of us.

Working On A Tan

The Golden Age of Television

I am Jim Brewer, Editor of the new CvilleBuzz, a humble on-line attempt to entertain those, not only … END_OF_DOCUMENT_TOKEN_TO_BE_REPLACED