You are here: Home / Boomer Memories / Turn the Radio On 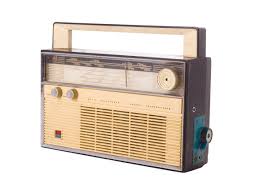 (Continuing the series on growing up in Lewisburg in the 1950s, a great small town and a great time to be young)

In the early 1950s, television was on the rise at the expense of the radio. Then, in 1954, Texas Instruments introduced the prototype of the transistor radio. It was a game changer. Young people were no longer attached to a tube radio, which had to be plugged in. They could take their music – and it was great music – anywhere.

Before the advent of the transistor, radios used tubes. They were bulky, inefficient and had to be plugged into an outlet. The small transistor radios required less power, a four-pack of size C batteries did the trick, and later, the 9-volt battery added extra hours of listening between battery changes.

In Lewisburg, my buddy Dave Gladwell was the first among his peers to get a transistor radio. I don’t remember what kind it was, but it was so powerful he could pick up stations on planets in space. Not really, but he could tune in stations as far away as Memphis and New York, where many of the hits of that era originated. The Memphis station often highlighted young black performers just starting out. New York, of course, had it’s fingers on the pulse of all popular music.

Not long after Dave broke the transistor radio barrier, I begged for and got one for Christmas. It was leather bound and made by RCA. It was a nice looking radio but lacked the power of Dave’s radio. On some days, if the moon and stars were aligned, I could pick up the Chicago Cubs broadcasts. They played only day games in those days. I wasn’t a Cubs fan, but it was something to do on a summer afternoon.

One station I could get was WRON in Fairleigh, 1400 on your dial, and it was a good one. In the 50’s, WRON Played the Top 40 songs – no talk radio, no country, nothing but Fats Domino, Little Richard, The Everly Brothers, Laverne Baker, Chuck Berry, The Coasters, Sam Cooke, The Diamonds and that’s what we listened to daily.

WRON began broadcasting in 1947 with just 250 watts of power. A few miles out of town and you’d lose the station. In 1953, WRON moved from Ronceverte to Fairlea. When you drove by their studio on Rt. 219 across from the state fairgrounds, you got really good reception.

In the early days, batteries were the biggest obstacles to a well functioning transistor radio. I remember falling asleep listening to music on my transistor radio and awakening the following morning with dead batteries. We didn’t have the Energizer Bunny in those days and batteries didn’t have much of a shelf life. They were fairly pricey, too. Fresh batteries were often on the wish lists of young folks for birthday and Christmas gifts.

Television, obviously, was hugely popular in the 50’s, but when we were in our rooms, or at the swimming pool, or hanging with our fiends, we turned the radio on.

I am Jim Brewer, Editor of the new CvilleBuzz, a humble on-line attempt to entertain those, not only … END_OF_DOCUMENT_TOKEN_TO_BE_REPLACED