You are here: Home / Boomer Memories / Turn The Radio On 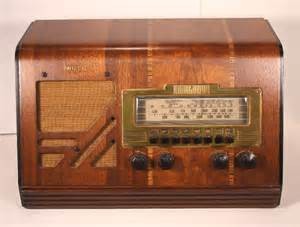 Many Boomers lived in an era call BT. Before television. In the late 40’s and early 50’s, there were only a handful of TVs in the entire United States. I think the White House had one, and maybe Clark Gable, and that was about it. My family had a Philco radio. It was the center of our family and social life. We kept the radio in the kitchen so Mom could listen while she was fixing meals or doing dishes. I spent hours beside the magical radio – imagining, wondering, trembling, marveling, laughing.

People sometimes tell me I have a wild imagination. But you had to use your imagination to listen to the radio. On the Lone Ranger show, for example, you could hear the hooves of the horses and you imagined the Masked Man and Tonto riding into town on Silver and Scout. With Charlie McCarthy cracking jokes, you had to see in your mind the wooden dummy sitting on the lap of Edgar Bergen. Tuning in Gangbusters – an early crime show – was nerve racking. From the start, Gangbusters was a radio sensation to rival American Idol on modern TV. The fast-paced show captured the vigilance of American law enforcement fighting criminals.

Every Sunday night was like a Super Bowl weekend on radio, with Amos & Andy, Bob Hope and Jack Benny offering back to back to back masterpieces in comedy. Even without being able to see Jack Benny, you could picture his famous blank expression during those hilarious pauses of his, followed by “Now cut that out!” responses to Rochester or Dennis Day. On radio, jokes seemed funnier, drama was more intense and the songs were even more beautiful than in real life.

When I was home in the mornings, during the summer or if I happened to be sick, my favorite program was the Arthur Godfrey Show. His voice was soothing and tantalizing. Whatever he advertised, you wanted to buy. All commercials back then were live and it was up to the host to sell the product. Godfrey was a master at the power of suggestion.

Boomers in the late 40’s and early 50’s will certainly remember the Sky King radio show. Sky was an Arizona rancher and pilot who captured bad guys, found lost hikers and saved the day for one and all. Penny, Sky’s niece, and Clipper, his nephew, were frequently involved in Sky King’s aerial episodes.

Before Ronald MacDonald began drawing children to the Golden Arches with toys and gadgets planted in the Kid’s Meals bags, Sky King lured half the youngsters in America into buying certain products that resulted in premiums to redeem, such as the coveted Sky King Spy-Detecto Writer, which had a “decoder”, a magnifying glass, measuring scale, and printing mechanism in a single package. Kids, of course, used the Spy-Detecto Writer to help Sky solve puzzles and mysteries.

I recall that Ovaltine was one of Sky King’s sponsors and it was mandatory that every home have at least one jar of Ovaltine in the pantry. I think it took three Ovaltine labels to qualify for the free de-coder. I drank the chocolaty mixture with every glass of milk, but never could figure out how to get the stuff completely dissolved. I noted not long ago that Ovaltine is still on the market and the company was now recommending that you drink it hot – maybe boiling would get rid of the crunchy residue at the bottom of the glass.

One of the most frightening shows on radio was The Inner Sanctum. Filmmaker, Alfred Hitchcock, proved to be a master of horror through the use of imagination and unseen threats, and radio had the same effect.

The Inner Sanctum began every episode with a creaking door opening and eerie, organ music in the background followed by a spooky voice saying, “Good evening, friends of the Inner Sanctum. This is Raymond, your host. Ha-Ha-Ha-Ha!”

What followed was 30 minutes of terror followed by numerous bad dreams on my part. We all love to be frightened, do we not? And nothing was more frightening than listening to unseen horrors on the radio.

I am Jim Brewer, Editor of the new CvilleBuzz, a humble on-line attempt to entertain those, not only … END_OF_DOCUMENT_TOKEN_TO_BE_REPLACED