You are here: Home / Boomer Memories / The Golden Age of Fine Clothing 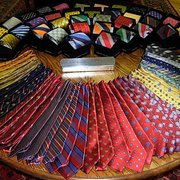 I moved to Charlottesville on the first day of February in 1967. Bill Leggett had hired me as Men’s Buyer for the new Leggett’s Barracks Road Store with the idea that Leggett’s would no longer be a work clothes and $3 white shirt store. They were looking to enter in the world of fashion, to sell better clothing.

My background included an intensive education in clothing at the University of North Carolina, where if you didn’t dress properly, you were an outcast. Clothes had to be perfect – Izod knit shirts, Bass Weejuns, Goldcup Socks, glen plaid sportcoats, madras anything, silk club ties. Lamb’s wool V-neck sweaters and Gant button down shirts. I had also worked for Munir Yarid at Yarid’s Mens Shop in Lewisburg, WV, at that time one of the finest clothiers in all of West Virginia.

I came to Virginia amid high expectations, but the competition in Charlottesville was intense.

In 1967, Charlottesville had Ed Michio’s, The Young Men’s Shop, Eljo’s and Page Foster. Between these men’s store clothing giants, all of the better lines were locked up. They wouldn’t sell to Leggett’s (which later became Belk stores.)

Can you imagine today if any manufacturer refused to sell to Belk’s? Hardly!

And there were some amazing clothing manufacturers back then – many of which have since fallen by the wayside.

The staff at each of those stores were all professionals and personal service was mandatory. An on-site tailor helped fit every jacket and pair of trousers.

But Charlottesville was certainly a great town in which to sell great clothing. In those days, almost all the students at UVA were men and all wore coats and ties to class – and especially to football games.

Lots of the UVA kids had lots of money and could afford the $100 shetland sport coats sold at Ed Michtom’s, but many others didn’t have that kind of money or weren’t willing to blow their allowances on expensive clothing. They came to Leggett’s where I fitted many with wool sport coats in $35 range. And we sold a bunch.

Of all those great stores, only Eljo’s has survived. The Men and Boy’s Shop is still downtown, and they sell nice clothing, but they were never a player back in the 60’s and 70’s.

Whereas most all of the fine clothing was made in the United States, none of it is today. It’s all imported, and very few people seem to care how they dress. They wear jeans and sport shirts to church and maybe a necktie on an interview. Most young men at UVA don’t even own a sport coat. They were jeans, tennis shoes and tee shirts on most all occasions.

Wow! How times – and clothing – have changed since the Golden Age of Fine Clothing.

I am Jim Brewer, Editor of the new CvilleBuzz, a humble on-line attempt to entertain those, not only … END_OF_DOCUMENT_TOKEN_TO_BE_REPLACED