You are here: Home / Boomer Memories / The Egg-Man Cometh 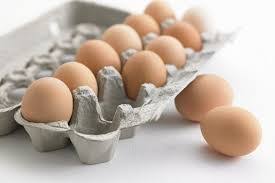 I’ve been spending a little more for eggs, recently. That’s because the cage free eggs are fresher and better tasting, so I splurge a little when I go to the store for eggs.

There was a time when the cage free eggs came to us. We had an Egg-Man. His name was Bill Handley.

Bill had a small farm west of Lewisburg, WV and raised cattle and poultry. He was a member of our church and you’ve never met a more pleasant, happy-go-lucky individual. He always had a smile on his face and a joke at his lips. Bill had a small, select clientele with whom he would share the bounty of his farm. Daddy was one of the lucky ones. Bill brought us fresh eggs, fresh milk, fresh butter and – Daddy’s favorite – fresh cream. With the rich, thick cream, Daddy doctored his coffee, and in season, Daddy made his famed eggnog – from scratch. It was butter smooth and delicious, even before the ‘nog went in.

Bill made his deliveries about once a week, usually on a Friday morning and he came rain or shine or snow. I can remember looking out the kitchen window the morning after a heavy snowfall and seeing the tracks of Bill’s old truck coming up the road and into out driveway. Outside, there would be a couple dozen eggs, a couple bottles of milk, some cream and fresh butter.

Cookies made with real, country butter, by the way, are simply unequaled.

One memory stands out about Bill Handley, our Egg-Man.

One morning I went out to bring in the eggs and one of the cartons only had 11 eggs inside. That was not like Bill at all. He was meticulous to a fault. He would never short anyone an egg from the traditional dozen.

I was puzzled until I saw the culprit. Our sometimes-wild English setter named Flash had escaped from the dog pen. He had actually opened the egg carton with his nose and mouth and removed the missing eggs and had run around in the yard with it in his mouth. When he tired of playing with the egg, he put it back on the concrete carport –in tact. The egg was no worse for the wear except for a bit of dog drool.

Flash, you see, had the softest mouth of any bird dog I have ever been around. Often, following a covey rise and seemingly unproductive shots, Flash would disappear for several minutes, ultimately returning with a quail in his mouth with perhaps only one birdshot in its back. And never, once did Flash bite a bird or leave any marks whatsoever. He was a good bird dog and he was a damned good egg-dog, too.

I sure miss bird hunting and I absolutely miss all those wonderful products that our Egg-Man, Bill Handley, once delivered to our door.

I am Jim Brewer, Editor of the new CvilleBuzz, a humble on-line attempt to entertain those, not only … END_OF_DOCUMENT_TOKEN_TO_BE_REPLACED