You are here: Home / Boomer Memories / Telling It Like It Is 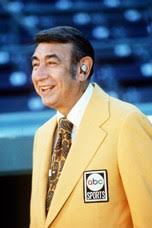 There are some voices that truly stand out in our past. Boomers look back and remember Edward R. Murrow, Arthur Godfrey, Jack Benny, Walter Cronkite, John Cameron Swayze, Orson Welles, Paul Harvey, Mae West and Groucho Marx as among those voices which needed no introduction. When they spoke, you knew who they were.

And there is one more. Howard Cosell, the greatest sports commentator of all time. Like him or hate him, Howard Cosell had the unique ability to make an event important. He could call a tricycle race between two toddlers and make it sound like the Kentucky Derby. He was arrogant, pompous, cocky, obnoxious and vain – a childish showoff – but he defined sports, commentating in the 60’s and 70s, changing his art from that of an ex-jock in the booth to a Plato behind the microphone. He gave supreme importance to any and every event he called.

Cosell was a lawyer by trade, representing many athletes including Willie Mays. He also represented Little League Baseball as a client and for several years hosted “The Little League Show” without pay. The broadcasting bug was so enticing that Cosell gave up his law practice entirely and went into sports casting full time. He began by hosting a daily radio broadcast called “Speaking of Sports.” His voice was mesmerizing on the radio and no matter the event, Cosell gave it relevance.

Cosell hit the big time with his prizefight broadcasting and his poignant interviews with Cassius Clay, who had changed his name to Mohammed Ali. Cosell was one of but a few to defend Ali when he refused to serve in the military because of his religious beliefs. Ali was subsequently stripped of his title as heavyweight champ, but remained good friends with “Howad”.

In 1970 (has it been that long?), Cosell was hired as a commentator for Monday Night Football. His banter with Don Meredith and Frank Gifford and his half time reviews of the weekend NFL games shot him into the stratosphere in fame.

It was widely known that Mr. Cosell enjoyed his vodka and sometimes it showed during his broadcasts, but he clearly led the pack of announcers until his retirement in 1984.

Who can ever forget the night Cosell called the George Foreman/Joe Frazier fight?

Cosell was a giant among mortals. He was the man in the yellow blazer and he told it like it was.

Do Not Pass Go!

I am Jim Brewer, Editor of the new CvilleBuzz, a humble on-line attempt to entertain those, not only … END_OF_DOCUMENT_TOKEN_TO_BE_REPLACED