You are here: Home / Boomer Memories / Steak Knives and Other Freebies 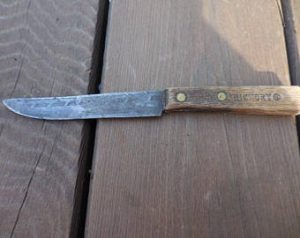 We have a single steak knife in our kitchen that moved with me to Charlottesville when I set up my apartment in 1967. My mom had given me some extra dishes, pots, pans and linens to get started. I originally had 4 steak knives but three have left the premises. Only one remains. Those original steak knives came from a gas station giveaway back in the 1950s. Fill up your tank and get a free steak knife. We had lots of premiums and giveaways in those days.

Boomers recall towels stuffed in boxes of detergent and china giveaways at supermarkets. With four box tops of most any product, you could send off and redeem them for prizes. But steak knives were among the most popular freebies.

Steak was a luxury before the mid-1950s. During the war years it was largely unavailable to most homes. But when the GIs came home and the economy started humming, families could afford a steak every now and then. After all, the price of a sirloin steak in 1955 was only 59 cents a pound.

Daddy would often buy T-Bone steaks, extra thin, and Mom would grill them under the broiler. No one used charcoal in the 50’s. That was more of a 60’s thing. But those T-Bones were some kind of good, especially when you gnawed the tender part around the bone after cutting the meat, naturally, with your genuine stainless steel steak knife that came from redeeming two books of S&H Green Stamps.

Cereal manufacturers were the pros when it came to tempting potential buyers with free gifts. They would offer a vintage toy car, for example, and then introduce three more to complete the set. They offered glasses with special etchings, and again, 3 or 4 to complete the collection. Some of those mint-condition sets sell for a pretty penny these days on E-Bay.

We now have several sets of quality steak knives from Dansk, Chicago Cutlery and others, but on occasion, I’ll pull the old steak knife from the drawer that has been with me all these years and carefully carve a T-Bone steak.

All steaks are better when you add a dash of memories.

I am Jim Brewer, Editor of the new CvilleBuzz, a humble on-line attempt to entertain those, not only … END_OF_DOCUMENT_TOKEN_TO_BE_REPLACED