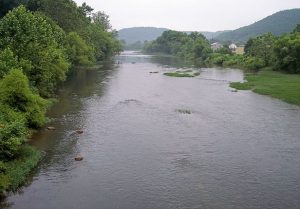 One of those special places in my life is and has been the Greenbrier River. When we moved from Beckley to Lewisburg, WV, one of the first attractions to this young fisherman was this beautiful piece of water. Beckley had nothing like it. The Greenbrier was a gentle river – clear, cold and inviting. The Greenbrier is a major tributary of the New River. It begins in Pocahontas County with  the confluence of the East Fork and West Fork of the Greenbrier and flows some 160 miles on its timeless destination to the New River. Today, it is the longest remaining unblocked river in the Eastern United States.

My first visit to the Greenbrier was a bank-fishing trip with my Dad. We caught a few red-eyes but I would later learn that the way to truly enjoy and appreciate the Greenbrier was to get in it – to wade and fish and to ease downstream with the gentle current.

My close friends – Mike Dawson, Dave Gladwell, Bill Shaver and I – did that on many occasion, We caught a lot of fish, but that wasn’t the most important part. Rather, it was a time to be with good friends as we struggled through our teen age years– and later as parents of teenagers.

I never caught any big smallmouth as a teen, I think 14-inches was my best fish, but that was a decent smallmouth for the Greenbrier. They grew much larger in the New River, but never prettier.

One of our favorite ways and times to fish the Greenbrier was at night, with a pen light in our pockets and a cigar – to keep the bugs away – in our mouths. We used black Jitterbugs and listened intently to the gurgle of the top water plug and the resulting explosion as a smallmouth attacked the lure.

Sometimes we tried for big carp on the gentle river and we were always on the look-out for the elusive walleye. I think I may have caught two in all my many trips. A local angling legend, Jackie Goodall, was the only one to be able to consistently catch walleye. He would often bring a five-pounder to our house. Daddy loved them.

We also liked to fly fish on the Greenbrier with small popping bugs. The best fly fishermen we knew was Mr. Shaver, Bill’s dad, who owned Shaver’s Music Shop. When it came to casting and fly fishing, he was as good as any of the stunt men in the movie, A River Runs Through It. He was an excellent fishermen and much admired.

Sometimes we would take our dates down to the river and just sit on the banks, listening to the bullfrogs and crickets, It was an enchanting piece of water and still is. It is a special place of a thousand memories.

The Land That Made Me, Me

I am Jim Brewer, Editor of the new CvilleBuzz, a humble on-line attempt to entertain those, not only … END_OF_DOCUMENT_TOKEN_TO_BE_REPLACED