You are here: Home / Boomer Memories / Smell Like a Man 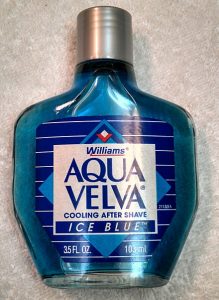 It was television that triggered the explosion in sales of men’s fragrances. Before TV, there were a handful of scents on the market – Mennen, Pinaud Clubman, Williams After Shave and a couple of others. But in the late 50s and 60s, people – especially men people – would buy most anything that was advertised. And we Boomers bought a pile of fragrances. Let’s go back and see.

Old Spice had been around for a while, but really took off after the product was packaged in the buoy-shaped bottle. Old Spice remains today a strong seller.

English Leather was a red-hot fragrance during the 50s and 60s. It was introduced in 1949, but soon became one of the most sought-after gifts for men of all time, attractively packaged in a wooden box.

Brut was another fragrance popular with young Boomers. Introduced in 1963, a reduced price point later helped Brut leap to the top of the sales board in men’s cosmetics. Who can forget the green bottle with silver logo and the potent smell?

Some Boomers may even recall a product called Hai Karate, a fragrance which included a small instruction booklet of karate moves that you were supposed to use to fend off the women who would be all over you after you applied this irresistible fragrance. The problem was with Hai Karate that it didn’t smell very good, and tanked after 5 or 6 years.
But perhaps the fragrance that kick-started the entire revolution in men’s cosmetics was Aqua Velva and the company’s dynamic advertising campaign.
“There’s something about an Aqua Velva Man!” cooed the ladies on TV.
And then Pete Rose came on the air and said those familiar words: “A man wants to smell like a man!”
That did it. Even Tonto and the Lone Ranger plugged Aqua Velva. The price was attractive, the packing appealing, and it smelled pretty good with a nice, clean, masculine smell – a little heavy on heavy on menthol and initially potent but fading to a pleasant masculine scent fairly quickly.
Interestingly, Aqua Velva got its start in 1929, not as an aftershave, but as a mouthwash! It wasn’t until 1935 that Aqua Velva started getting pitched exclusively as an aftershave. Aqua Velva’s biggest selling point was always the cooling menthol that soothed away razor burn.
I think Aqua Velva was $1.99 a bottle back in the early 60s, not a small sum for that time, but affordable. Today, an upscale department store sells designer men’s fragrances for a hundred dollars an ounce. And you know what? Most of them still won’t make a man smell like a man!

Put on Your Sunday’s Best

Stewball Was a Racehorse

I am Jim Brewer, Editor of the new CvilleBuzz, a humble on-line attempt to entertain those, not only … END_OF_DOCUMENT_TOKEN_TO_BE_REPLACED