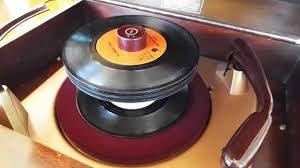 The hands-down most popular retail establishment in Lewisburg in the 1950’s was Shaver’s Music Shop on Washington Street. Kids made daily or almost daily visits to the small store to see if their favorite record had arrived or if there was a new hit out that they wanted to hear.

Burr Shaver, a talented local musician, ran the shop and was one of the best salesmen in the history of Greenbrier County.

Mr. Shaver always had a new song playing on the store record player and if you showed even the tiniest bit of interest, it was likely to end up in a small paper bag in your hand and you would have a dollar less in your pocket than when you came in. Heaven forbid if you inquired about a new release. That was Mr. Shaver’s carte blanche to order it, put your name on it and say the next time you stopped by, “Here’s the record you wanted, Jimmie. That will be one dollar.”

In those days, we bought 45 records and they were one dollar. Not a dollar and five cents or 98 cents, but one crisp dollar bill. A dollar was no small sum for a young person in the 1950’s. It likely represented an entire weekly allowance, so that record had to be extra special for you to shell out.

45 records were introduced in 1949 by RCA. More compact than a larger 78 speed record, 45’s were a perfect fit for jukeboxes across the country. Each record player back then had three speeds – 33, 45 and 78. If you wanted to play a 45 record, the phonograph required a spindle (which never worked) or a plastic disc inserted into the larger hole of a 45 record.

The great thing about 45’s was that you could buy the song you wanted without investing in an album. Usually the record had one great song on Side A, but nothing you’d want to hear on the B Side. But Elvis often had records with two good songs as did Little Richard and the Everly Brothers.

There were so many great songs in those years that you really had to be selective about which one and how many of those 7-inch discs went in your collection. Sometimes Brad Stuart and I would each buy a different record, play them for a few weeks, then swap. That stretched our budgets a little. Also, at local sock hops, if someone had just bought Silhouettes on the Shade, you could enjoy their record and save up for Tutti-Frutti by Little Richard.

Some of the great songs of that era that I fondly recall include Why Do Fools Fall in Love, Only You, I Hear You Knocking, Heartbreak Hotel, The Great Pretender, Tonight You Belong to Me, Blueberry Hill, Chances Are, Great Balls of Fire, Come Go With Me, Wake Up Little Susie, Rock and Roll Music, Love Is Strange and countless others.

I had many of those songs in my collection of 45 records and I bought every one at Shaver’s Music Shop.

I am Jim Brewer, Editor of the new CvilleBuzz, a humble on-line attempt to entertain those, not only … END_OF_DOCUMENT_TOKEN_TO_BE_REPLACED