You are here: Home / Boomer Memories / Phone A Friend 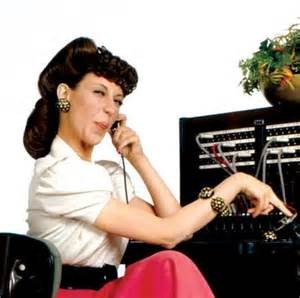 (This is the sixth in a series of growing up in Lewisburg, West Virginia, perhaps the greatest town and in the best time to grow up that a young man could ever ask for.)

Not long after we moved into our house on Court Street in Lewisburg, WV, the phone man arrived and set up our line. Remember, this was 1955, before cell phones and apps, before touch-tone phones, even before dial phones. In our kitchen was a black phone with a receiver, but no dial whatsoever. A piece of white plastic with”104” was on the face of the phone. That was our number. To make a call, we had to pick up the receiver and wait for the telephone operator to connect. Sometimes she was Johnny-On-The-Spot, and sometimes we had agonizingly long waits before she answered and said, “May I help you?”

That was Dave’s number, as best I can remember.

“You want the Gladwell number?”

“They’re not home. Bill Shaver just called and nobody answered.”

The operator was right. No one was home.

But not only did we have to deal with a telephone operator to place all our calls, we were also on a party line.

Because supply lagged far behind demand, phone lines were rationed in many places in the 1950’s, with as many as 4 or more households on the same line. On a party line, anyone could listen in to a conversation by any one on that party line by simply picking up the phone. Party lines were a snooper’s best friend. It was impossible to keep a secret. If you said it on the phone, and you were on a party line, everybody knew. It was sort of like Google today. They know everything.

Though party lines were less expensive than private lines, most phone customers wanted private lines, but there were simply not enough lines to go around, especially in small towns.

The telephone operator therefore became the most powerful person in Lewisburg. That’s because she determined who got calls and who didn’t.

My new Lewisburg friends and I spent our share of time chatting on the phone, but we didn’t walk around glued to the face of a cell phone, 24-7. Rather, we phoned each other to find out when baseball practice started or to decide if we would take in a movie at the Court Theater on a Friday or a Saturday night. And if there was ever any handholding with girls at the movies, that was good information to share with friends – as well as everybody on the party line.

In the late 50’s, the phone operators largely went the way of the dinosaurs, because the Bell System introduced phones that could dial directly from one line to another. Instead of 2, 3 or 4 numbers, we now had 7 numbers. Our number was 645-2326, and I worried at first that with all those numbers I might forget, but I didn’t, and eventually committed to memory nearly every number of every classmate in town. It was like a mental speed dial.

Despite the onslaught of technology, especially concerning telephones, I often find myself looking back to another time, a simpler time, when it was good to simply pick up the telephone and chat with a real person – even if it was just the telephone operator.

I am Jim Brewer, Editor of the new CvilleBuzz, a humble on-line attempt to entertain those, not only … END_OF_DOCUMENT_TOKEN_TO_BE_REPLACED