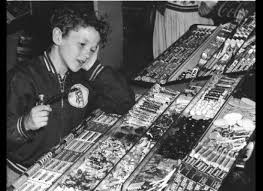 I saw a penny in the parking lot last week and stopped and picked it up. Most people won’t. A penny is looked upon as a nuisance coin. People drop excess pennies in a dish beside the cash register these days rather than fool with them. Afterall, there is not much you can do with a single penny. Boomers, though, can remember back when a mere penny bought tons of pure joy. Those were the days of penny candy.

One of my fondest memories as a child was when we lived on Jennings Street in Beckley, WV. I was in third grade and walked to school on most days and then walked home. But on the way home, I often made a slight detour. About a block from Lincoln Elementary was an old store that sold general merchandise. It was a dark store with creaky wood floors and large glass counters. An elderly lady managed the front desk and also had an apartment upstairs. The store sold canned goods, a few dairy products, fresh bread and candy! Especially candy and most of it was a penny apiece.

A carton of milk at the school cafeterias was two cents in those days and often parents would dish out a nickel before school for a half-pint of milk. That meant there were three pennies left over if you didn’t get two cartons of milk and that meant a stop at the old store on the way home.

There were two types of bubble gum to consider. My personal favorite, flavor-wise, was Double Bubble. This was the sweetest of the bubble gums. It was usually rock hard out of the pack and tough to get started and to make chewable, but once you had gnawed on it for 5 or 10 minutes, you could blow amazing bubbles and it retained flavor longer than the other gums.

The second choice was Bazooka. For a mere penny, not only did you get a piece of bubble gum, there was also a folded comic strip that came with each piece. The wrappers each contained an adventure with Bazooka Joe and his friends – Mort, Hungry Herman, Jane (Joe’s girlfriend) and others. The comic had a small advertisement in the corner for various products. It also had a corny kids’ joke and a fortune, like a fortune cookie, only funny.

The piece de resistance of all candy counters was an Atomic Fireball. These babies were so hot they’d leave blisters in your mouth. Sometimes, on a dare, we’d put one in our jaw during class and try to make it all the way through without taking it out.

But we were tough, us Boomer kids. Atomic Fireballs helped us prepare for the really challenging situations in our coming lives. In the end, most of us turned out okay, and I suppose we owe it all to Penny Candy.

My Field of Dreams

I am Jim Brewer, Editor of the new CvilleBuzz, a humble on-line attempt to entertain those, not only … END_OF_DOCUMENT_TOKEN_TO_BE_REPLACED