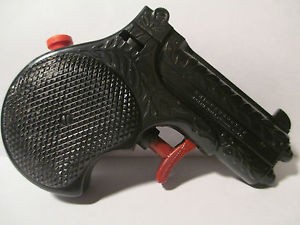 I suppose if a child brought a squirt gun to school these days, he or she would be tased, wrestled to the ground, bound in chains and then really bad stuff would happen.

For Boomers, squirt guns at school were a way of life. We considered them to be part of the Second Amendment – the right to keep and bear plastic weapons that would soak your fellow classmates. We did not need a concealed/carry permit. We just kept them under wraps so our teachers would not confiscate them.

The squirt gun I most remember was a small, black water pistol made by a company called Knickerbocker. They were compact, like a derringer, and you could put them in a back pocket and fire on command. They only held a couple ounces of water, so you had to reload at the water fountain between classes, but on a good day I could shoot across 4 aisles of students and nail Harold Spangler with a jet stream. The reason I did that, of course, was because he had just drenched me with an unprovoked squirt.

Initially, the boy Boomers packed “water heat” so we could squirt the girls. It was our awkward way of flirting. The cuter the girl, the more likely she was to be squirted.

But the girls did not play fair in the war of water pistols. They quickly went to the nuclear option, filling 16-ounce Baby Oil containers with water and if fired upon, they would let you have it with the whole bottle. If you squirted a chick with your tiny Knickerbocker gun, she might giggle, but you would be soaking wet until school let out.

I don’t know how many squirt guns I owned in my life of aquatic crime – I suppose 25 or 30. Teachers represented the greatest threat to the loss of a water pistol. I once looked in the top drawer of Mr. Ryder, our homeroom teacher, and he had at least a hundred. The little squirt guns weren’t expensive – about 39 cents, but that was big money for a Boomer when the movies were just a quarter for admission.

The origin of squirt guns dates back to the 1880’s, when they were actually made of metal. Plastic squirt guns hit their stride in the 1950’s and there were many shapes, colors and sizes. Squirt guns were powered with pump action, activated by an itchy trigger finger. Sometimes you had to prime the gun with several quick squeezes, and then fire. Water pistols were always a blast on a hot summer day, and often our parents encouraged us to go out and play and squirt each other.

But for a teenage Boomer, every school day was a Gunfight at O.K. Corral, and woe be to those who might lay down their arms in Algebra class.

I am Jim Brewer, Editor of the new CvilleBuzz, a humble on-line attempt to entertain those, not only … END_OF_DOCUMENT_TOKEN_TO_BE_REPLACED