You are here: Home / Boomer Memories / More About the FBI 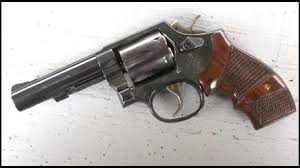 As I mentioned last week, my dad was a Special Agent for the FBI under J. Edgar Hoover in the 1950’s and 60’s. Daddy never killed anybody as an agent, but that’s only because he never shot at anybody. If he had, they would be dead.

Daddy carried a Smith & Wesson, 38-revolver with a 5-inch barrel. At work, he carried it in a simple leather holster on his right hip. At home, it was on the dresser, near his bedside. My brothers and sister were told quite plainly, “This gun is always loaded. Do not touch it.”

Daddy went to Quantico to train once a year. Before he went, he would often fast to get his weight down to a svelte 175 pounds – and he was 6-1. Mr. Hoover did not tolerate potbellies. His agents were in prime physical condition or they weren’t agents for long. They were also expert marksmen. Daddy frequently brought home the full body targets he shot at on the range. I believe they started firing at about 75 yards, moving closer after 5 shots until they finished the exercise. The targets Daddy brought home were all dead men. He didn’t miss. Sometimes, for practice, as Daddy was bending his way around the West Virginia curves on the back roads, if he saw a groundhog, he would slow down and shoot it in the head. From the road! While moving! As I said, he didn’t miss.

Were Daddy alive today, I’m sure he would dismiss all the cop shows as as pure fabrication. On TV, the men and the lady cops – including FBI personnel – are armed with Glock-type semi automatic pistols. During shootouts, they hold their weapons sideways and spray the supposed targets with random shots. Under Mr. Hoover, the idea was to take one shot and make it count.

When, and if necessary, Daddy pushed back his suit coat on the right side, pulled his revolver from the holster and fired straight ahead as he took one step forward. He could draw his pistol faster than Randolph Scott in an old western movie. It was draw, step and fire in a split second.

He also showed me something one evening after I had watched a bad man on TV hold a pistol near the belly of the star. Daddy had me get one of my toy pistols, and get within an arm’s length, like the bad guy on TV. The he said, “Squeeze the trigger” as if to shoot him. Before I could squeeze the trigger, he swatted the gun about 20 feet away, “Son,” he said. “You can knock a pistol away quicker than the trigger can be pulled.” That was good information. Fortunately, I have never had to use that information.

When I became engaged to my wife, Nancy, Daddy asked is she wanted to see where he worked. She said, “Sure!” He took her down to his office on Church Street and fingerprinted her, She thought that was cool, but I’m sure Daddy was checking her out. Mr. Hoover and the FBI left nothing to chance.

Nancy was good to go and we’ve been married going on 51 years. The FBI was once an amazing organization and my dad was an amazing man.

I am Jim Brewer, Editor of the new CvilleBuzz, a humble on-line attempt to entertain those, not only … END_OF_DOCUMENT_TOKEN_TO_BE_REPLACED