You are here: Home / Boomer Memories / I Haven’t a Clue 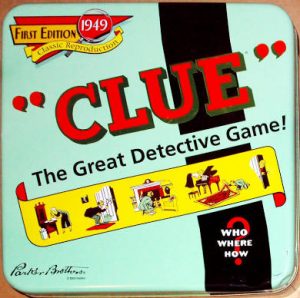 Was it Col. Mustard with the lead pipe in the ballroom, or could it have been Mrs. White with the rope in the conservatory? If you haven’t a clue, then you likely aren’t a Boomer.

On a winter day and with a rare school closing due to snow, Boomer kids raced up and down steep hills in our Flexible Flyers until exhausted, and then we gathered up a gang and went to someone’s home for hot chocolate and a spirited game of Clue.

Clue was infinitely more fun and challenging with 4 or 5 players and it was a great way to develop the skill of deduction. Slowly, but surely Miss Scarlett, Mrs. Peacock, Mr. Green and others were eliminated from the slate of the suspected murderers and the weapons, such as the revolver, the candlestick and the wrench were dismissed. But was it done in the kitchen or the hall or maybe the lounge? We rolled dice, traveled from room to room and posed suggestions until we were sure to have solved the crime.

Boomers played a lot of board games and playing those games required friends. We actually socialized in those days instead of burying our collective heads and staring at a black, rectangular instrument.

We played Clue, we played Parcheesi, Battleship, Sorry, Chinese Checkers, Monopoly, Scrabble and many other games that challenged various skills.

You can tell a lot about a person, for example, by how he or she plays Monopoly. Some are very conservative and refuse to buy properties unless they are sure to get that ‘monopoly” while others attack the board, buying everything in sight and then hoping to make a shrewd trade. Some spend all their cash for houses and hotels and hope for the best, while others squirrel away a cash reserve in case they land on a Boardwalk or a Park Place.

But back to Clue, called Cluedo in England where the game originated and was first manufactured in 1949. By the mid- to late-50s, nearly every household in America had a Clue game from Parker Bros. and clearly a game of strategy

Did you know that if you chose Mrs. Peacock as your token, you had an immediate advantage of starting one-space closer to the first room than any of the other players? On the other hand, Professor Plum could move to the study, and then take the secret-passage to the kitchen, the hardest room to reach. Traditionally, Mrs. Scarlett always went first and that was an advantage.

There was a lot of strategy involved, which made the game most interesting.

They still sell Clue games today, but when is the last time you saw anyone or even heard about anyone actually playing it?

Too bad. It was a lot of fun and it was an activity that brought people of all ages together.

Turn the Radio On

I am Jim Brewer, Editor of the new CvilleBuzz, a humble on-line attempt to entertain those, not only … END_OF_DOCUMENT_TOKEN_TO_BE_REPLACED