You are here: Home / Boomer Memories / Hoping For a Lionel Train 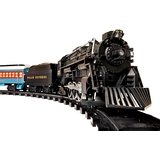 The Pent-ultimate Christmas present for every Boomer boy was a Lionel train. And so it was with me.

I was seven and a Lionel train was at the top of my wish list to Santa Claus. I simply had to have one, even though they were fairly pricey and my dad earned only a modest salary as an FBI agent.

By boyhood friend, Billy Richmond got a train for Christmas the year before. Billy was a year older and his dad was a doctor, so his was a pretty nice outfit, but nothing like that of Hal Turner, a neighbor of ours and the envy of every young boy in and around Beckley, West Virginia. Hal was about 14 or so and he had a Lionel layout in his attic that was truly amazing.

Hal had a complete, miniature town with houses, buildings, bridges and people and 8 train tracks, each with different locomotives. His outfit had all the bells and whistles with car coupling stations, a half dozen transformers and every car and engine made by Lionel. It was a sight to behold.

Lionel was and is an American icon. A toy manufacturer and retailer, Lionel began operations in 1900 as an electrical novelty manufacturer.

Their first Lionel train, the Electric Express, was not meant to be sold to the public, but rather was to be used in a storefront display to draw attention to the other goods on sale at the store. But it was the trains that people wanted. Lionel began producing them as toys and also marketed them to department stores to be used in window displays such that Lionel trains, Christmas and gifts were all part of a brilliant marketing strategy. By the 1950’s, sales peaked with Lionel at $25 million per year.

I did get my Lionel train that Christmas as I had hoped, but it was a simple layout with a standard locomotive, three cars, a caboose and a simple oval track. Over the next few years, I added more track, a few cars and engines to the layout, but it never approached the complexity of Hal Turner’s train room in the attic.

Still, every Christmas, even as grown men, there is something special for us Boomers about the thought of a Lionel train for Christmas. It’s impossible to see one on display or on a commercial that it doesn’t whisk you back to the wonderful memories of youth and Christmases long, long ago.

I imagine that for most of us, if we walked in the living room on Christmas morning, and magically there was a Lionel train set up around the tree, we would each one sit down immediately at the controls, cross our legs, say “All aboard” and start the engine.

I am Jim Brewer, Editor of the new CvilleBuzz, a humble on-line attempt to entertain those, not only … END_OF_DOCUMENT_TOKEN_TO_BE_REPLACED