You are here: Home / Boomer Memories / High Over Hilo 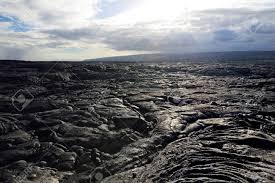 I was a little edgy the last time I boarded a helicopter. It was a chopper in Kauai on our last cruise. But this time I was excited to hop into the 6-passenger aircraft. The most spectacular views of Hawaii, I have discovered, come from the air.

Our pilot spun us around and headed for the lava fields. We were in Hilo on the east side of the Big Island of Hawaii, the site of the 2018 eruption of Kīlauea.

As we flew over Hawaii, the largest island of the chain and commonly called the Big Island, you could see the various colors beneath us depicting the most recent of the lava flows. The greener the land, the longer since the last volcano flow. On the horizon, though, we could see the complete blackness of the year-old eruption of Kīlauea, a devastating volcano that gobbled up 700 homes, yet added nearly a thousand acres of real estate along the Pacific. The Big Island of Hawaii is one of the few places on earth that is growing, not shrinking.

The ebony lava below looked like fields of death, when actually, they represent life. It’s how Hawaii was born, was created from scratch. Those hotspots in the Pacific erupted and have continued erupting, forming and shaping  the Hawaiian Islands.

Our pilot explained that when Kīlauea blew its stack, the lava did not come barreling down the side of the mountain, but rather, found underground tubes and traveled through those conduits towards the sea, popping up in what they called fissures. We could see some homes that were spared as the lave raged within feet of their yards while others – well, they are no more.

Amazingly, no one lost their life, though a few crazies decided to jump in the flow and sacrifice themselves.

But the earth comes to life quickly after an eruption. Small plants and ferns sprout within weeks. Trees begin to grow in as few as 7 years. I find that amazing.

Our helicopter ride swung us all around Hilo, which is the largest city on the Big Island, population 43,000. Yet, because most of the Big Island is volcano country and owned by the state, the Big Island is one of the least densely populated pieces of land in America, even less than Alaska.

Like the other islands, Hilo was devastated economically when the sugar industry died out in the 1990’s, but has seen a big resurgence in recent years, as tourists discover its beauty.

After our ride in the chopper, we called Tina with Hawaii Excursions and she was free. We had toured Hilo with her on our last cruise. She was most entertaining then, and still is. Two other couples joined us as we saw first-hand, the devastation of the Kīlauea.

Tina had a friend whose home was within yards of the lava flow. We parked there and walked the black terrain, still hot in places, even after a year. We could see small fissures where steam was rising after a recent spray of rain. You could feel the heat hissing beneath. It was like a sauna. Nearby was a mountain of red and black, one of the largest fissures left in Kīlauea’s wake. It was also still steaming.

If we could somehow harness the power from the center of the earth, there would be no need for fossil fuel or any other fuel for that matter. The earth’s core is a source of incredible power.

Later in the afternoon, we revisited Rainbow Falls, an 80-foot cascade and we also strolled along the black sand beaches of Hilo, stopping to admire a pair of four foot sea turtles sunning on a lava rock.

Today, Hilo. Tomorrow we visit Kona on the west, the opposite side of the Big Island.

Let’s Do the Twist

I am Jim Brewer, Editor of the new CvilleBuzz, a humble on-line attempt to entertain those, not only … END_OF_DOCUMENT_TOKEN_TO_BE_REPLACED