You are here: Home / Boomer Memories / Haircuts and Coupons 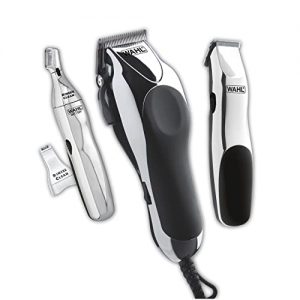 A number of years ago,  I discovered coupons. The grocery stores began putting the coupons in their ads and one day I cut out a few. It was like the first roll of dice to an addicted gambler in Las Vegas. I was hooked – saving 10 cents here and 20 cents there. Our limited shelf space became overloaded.

“What are these three boxes of Meow Mix doing in the cabinet,” my wife, Nancy, asked.

“I used three coupons. We saved 40 cents a box,” I pridefully boasted.

Every Wednesday I scoured the papers, clipping coupons, and often going to multiple stores to redeem them. Boxes of tissues and washing detergent began piling up on the basement stairs. I was out of control –  a coupon-aholic.

About the same time – these were my money saving years – I calculated that if had my own haircutting equipment, who knows how much money I could save by not going to the barber shop? So I bought a set that included several pairs of electric shears, some razor sharp scissors, a razor hair-cutting tool and assorted combs.

I immediately offered to trim Nancy’s hair and that was resoundly rejected.

“I’d rather shave my head,” she said.

My Aunt Anne was totally bald and I once saw her without her wig. It was not a pretty sight, so I backed off trying to cut Nancy’s hair, but my 8 -year old son was in need of a haircut so I put him in the barber’s chair – the commode in our bathroom – and broke out my tools of the trade.

Jimmie was a reluctant customer, but I assured him I had read all the directions, which I figured was the rough equivalent of two years of barber school.

I went to work with the electric shears, buzzing a little off one side then the other. Looking at him straight on, he appeared a little lop sided, but if he held his head slightly cocked to the right, who would notice?

At that point I broke out the scissors, and did I mention they were razor sharp? Well, they were. I began clipping and trimming like a pro. Snip-snip here and snip-snip there. I was like Edward Scissorhands working on the shrubbery. Then I got a mite careless and whacked into a good bit of ear lobe with one of my snips.

My son shrieked in pain, flew out of the bathroom and hid under his bed until dinner.

When he emerged, Nancy took a look at my not-so-handiwork and banned any further bathroom haircuts. Jim’s Barber Shop was no more.

However, since all the barbershops in town have recently been shut down by the government, if anybody out there needs a little trim, I still have my equipment and I really did read the instructions.

A Trip to the Dairy Queen

A Little Dab’ll Do Ya

I am Jim Brewer, Editor of the new CvilleBuzz, a humble on-line attempt to entertain those, not only … END_OF_DOCUMENT_TOKEN_TO_BE_REPLACED