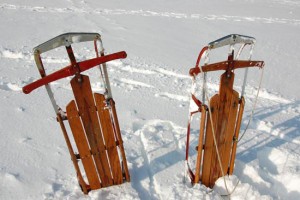 Countless Boomers will flock to the stores this month to buy what they hope will be welcomed toys for their grandkids, but there was a time when Boomer children also received great toys and gifts for Christmas.

Toys were simpler back then, but no less appreciated. There were no computers or electronic games back then, nor cell phones with cameras or IPods.

Bikes were overwhelming favorites for young Boomers. They were the flat-screen TVs of our time. The ultimate Christmas present.

Another great toy for young Boomers was a classic Radio Flyer Red Wagon. These were solid, metal wagons, some had wooden sides, but it was one of the most versatile toys ever made. A Radio Flyer Red Wagon could haul up to two younger brothers or sisters and helped ease baby sitting chores, but the ultimate joy of a Radio Flyer for a Boomer kid was to perch inside, turn the handle backwards as a steering instrument and speed downhill, deftly dodging cars and unsuspecting pedestrians  – and all this without a seatbelt or helmet. There were countless scuffed knees and elbows, but few if any serious injuries.

Another great gift was a Flexible Flyer sled. Snow was a big deal in the 50’s and 60’s and it seems we had more of the white stuff back then. Kids relished school cancellations and quickly assembled on a nearby hill to speed down the lightning quick slopes. Serious sledders always waxed the sled’s runners with Ivory soap and, of course, a small rope was attached to the front of the sled to pull it along.

An especially welcomed gift which came to “good kids” 12 and older was a Brownie Kodak camera. The Brownie 127 was one of the most popular cameras in the world. It was a simple camera with a viewfinder and a clicker. Later, the Hawkeye Camera was introduced with a genuine flash attachment, and flash bulbs that sometimes worked and sometimes didn’t.

Anther memorable toy of that era was a Betsy Wetsy doll. Betsy would actually “wetsy” if you fed her enough water from a baby bottle. Apparently, Betsy had no internal organs – kidneys and the like.  The fluid passed directly from the mouth to you-know-where. But Boomer girls obviously didn’t mind changing diapers –at least back then.

And remember the great watches of that era? Bullova, Gruen, Longines, Omega, Waltham and Wittnauer? And Timex, the watch that takes a licking and keeps on ticking? Boomers fondly remember the affable John Cameron Swayze with his weekly Timex Torture tests. A nice watch was always a coveted Christmas gift.

A wind-up fire truck is another toy that was placed beneath many a Christmas tree for Boomer kids. This was possibly the loudest toy ever assembled. Bright lights flashed and sirens wailed when the springs on the truck were wound and the vehicle was released to race across the floor and crash against a far wall.

When it comes to children, some things never change.

Put on Your Sunday’s Best

I am Jim Brewer, Editor of the new CvilleBuzz, a humble on-line attempt to entertain those, not only … END_OF_DOCUMENT_TOKEN_TO_BE_REPLACED