You are here: Home / Boomer Memories / Fill ‘er Up 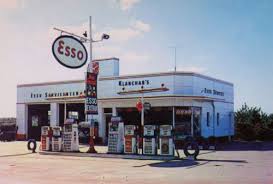 There were real, honest-to-goodness service stations in Lewisburg, WV when I was a boy. Not only did they pump gasoline, they offered genuine service. As I recall, we had just two gas stations there in the 1950’s, an Esso station on Washington Street, down and across from the post office, and another at the corner of  Church Street and Washington. The second station sold Pure Oil if memory serves, but we never went there, Back then, people and their automobiles were loyal to just one brand of gasoline. Our family was always an Esso customer, even and especially on trips.

There were but a handful of gasoline brands back then and all advertised heavily on TV. Folks from Esso, Amoco, Pure Oil, Gulf, Phillips 66, Shell and Sinclair strongly suggested that their gasoline was best, while all the others were imposters.

“Trust your car to the man who wears the star’ said Texaco.

“Put a tiger in your tank,” the Esso ads stated.

“Be sure with Pure.”

My buddy, Brad Stuart’s father worked at the Esso Station and greeted each car with a “Fill ‘er up?” question. Adults usually said, “Sure” while teenagers counted their nickels and dimes and sometimes ordered just a dollar’s worth. But Mr. Stuart gave every customer the same, great service. He wiped their windshields clean, opened the hood to check oil and water and would bring out a tire gauge and pump if anything looked low.

“Oil’s a little dirty,” he might say. “Better come in soon for a change.”

A dollar in those days bought a lot of gas. In 1950, gas was 18 cents a gallon. It was about a quarter a gallon in 1956. By the end of the decade, gas prices had skyrocketed all the way to 28 cents a gallon. The very idea! A one-dollar bill in 1960 would buy about 4 gallons, enough for about a hundred miles – if you didn’t gun your engine. Two dollars-worth would last at least a week and five dollars would take you to Myrtle Beach.

On occasion, one gas station would reduce prices drastically to beat the completion in what were called gas wars. Also, gas stations would frequently offer premiums and prizes for buying there. I remember towels, glasses, green Stamps and dishes given away free to loyal customers.

If a gas station back then sold anything inside besides gas and oil, it was soft drinks and maybe peanuts and N. No sandwiches, magazines, bobble heads, Twinkies or popcorn. Just gas and snacks.

Today, motorist don’t buy brands of gas, they go to whichever station is convenient and the cheapest. They charge people these days to put air in their tires. If there is any windshield cleaning, you do it yourself. And in this world of self-serve, who would ever expect to hear those once familiar words: “Fill ‘er up?”

I am Jim Brewer, Editor of the new CvilleBuzz, a humble on-line attempt to entertain those, not only … END_OF_DOCUMENT_TOKEN_TO_BE_REPLACED