You are here: Home / Boomer Memories / Don’t Shoot Your Eye Out 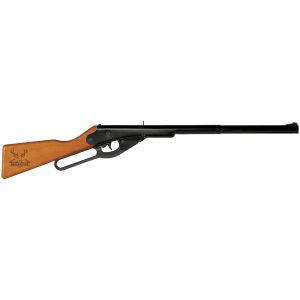 My youngest daughter was always something of a tomboy. She tagged along with me on dove hunts and delighted in floating and fishing the James River. When she was in 5th grade, a fellow in the local Jaycee’s approached me about sponsoring a youth BB gun team.

“Sure I’ll buy them a gun,” I said.  Daisy made some special target air rifles that were deadly accurate at 5 meters, and they cost about $95 – a small price to pay to encourage youngsters to shoot.

“Not only do we want you to sponsor the team,” my friend said. “We also want you to organize and coach the team.”

“If I can get my daughter to round up three other teammates, I’ll do it,” I said, not stopping to think about the consequences of that snap decision.

When I told Laura about the potential team that afternoon, it took her exactly three minutes and three phone calls to recruit our merry band of sharpshooters.

“When do we practice, Dad?” she asked.

Practice? Nobody said anything about practice.  I figured that was just something kids did naturally.

When I was a kid, my BB gun never left my side – except during probationary periods when I aimed at and hit restricted targets such as streetlights and house cats.  A streetlight would cost me about two weeks without my gun, but hitting a cat with a well-placed BB didn’t amount to much more than a day or two.  My Dad didn’t like cats either.

As we assembled in my basement for our first practice, I tried to think of what I could possible say to these youngsters that would improve their accuracy on the range. This was the best I could come up with:

“Rule number two says that when Mr. Brewer goes down range to retrieve the paper targets that you each refrain from having a loaded gun pointed in my direction, which could misfire and whack me in the seat of the pants.”

Thinking back, I could remember when Brad Stuart and I used to shoot each other in the seat of the pants with our BB guns. At about 25 yards, and with a thick, new pair of Levi’s, you could barely feel the BB burrowing into your, uh, rear end. With chinos, it hurt like hell. But somehow we survived those years.

“Rule number three says that you squeeze the trigger, don’t jerk it when you shoot.” I remember reading that somewhere. “And also take a deep breath and let out about half the air before you squeeze. “ I read that somewhere, too.

“Rule number four, team, is that we will be good sports. When we lose, do not cry and do not shoot at the winning team, even though they may deserve it.”

“Because our first match is with the Junior R.O.T.C. Rifle Team from Miller School,” I responded.

Miller School, a private military-oriented school in Albemarle County, was indeed among the six teams we would compete against for the city championship.  The Cadets from Miller marched onto the range with shiny black combat boots, infantry clothes (including spiffy berets) and weapons in steel cases.

“Big deal,” said Laura. My kids then proceeded to hammer the centers out of each target and won going away.  And they didn’t shoot out a single eye!

But it wasn’t over yet. Now we had to go to the state championship in Lexington, competing with about a dozen teams from across Virginia. This was starting to take a little more time than I had reckoned with, and if we won the state, we had to go to Tennessee the following week to compete in the National J.C. Air Rifle Tournament.

Surely these kids won’t win the state tournament, I fretted. That would mean I would miss the opening weekend of wood duck season.

We came in second in the state and I feigned huge disappointment, but the kids seemed delighted with their runner up trophies, especially when I bought them each a double fudge banana split at Tastee Freeze.

“This was fun, Dad,” Laura said, wolfing down her ice cream. “Let’s do it again.”

“Why not,” I said, licking the last of the chocolate from my

depleted bowl. “As long as you don’t shoot your eye out!”

I am Jim Brewer, Editor of the new CvilleBuzz, a humble on-line attempt to entertain those, not only … END_OF_DOCUMENT_TOKEN_TO_BE_REPLACED