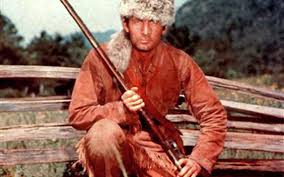 Born on a Mountaintop in Tennessee

Greenest State in the Land of the Free

Raised in the Woods so he Knew Every Tree

Kilt him a “B’ar” when he was only three.

King of the Wild Frontier

It all began on December 15, 1954 when Walt Disney aired “Davy Crockett, Indian Fighter” as part of the hugely popular Disneyland Series. Americans, especially kids, were glued to the set with TV Dinners on the TV trays. Davy (Fess Parker) and his sidekick, George Russell (Buddy Ebsen), fought Indians in various skirmishes under the command of General Andrew  Jackson. In this episode, Davy kills a bear armed while armed only a knife. He quickly became the stuff of legend.

Later, Disney aired “Davy Crockett Goes to Congress” and “Davy Crockett at the Alamo”. The ratings for these episodes were 100%. If you had a TV, you watched. Several feature films also starred Fess Parker as the backwoods American hero, and America flocked to the silver screen as well.

Davy Crockett was such a hot commodity that Disney made a veritable fortune by licensing sales of Davy Crockett paraphernalia ranging from bubble gum cards to coonskin caps to pajamas and clothing. Unfortunately for Fess Parker, his contract did not include any royalties – a multi-million dollar oversight.

We all know how Davy met his fate at the Alamo alongside George and Sam Bowie, but on TV, he was still fighting Santa Anna’s Mexican troops as the final episode ended. Deep down, we all knew that somehow Davy Crockett would find a way to escape.

I am Jim Brewer, Editor of the new CvilleBuzz, a humble on-line attempt to entertain those, not only … END_OF_DOCUMENT_TOKEN_TO_BE_REPLACED