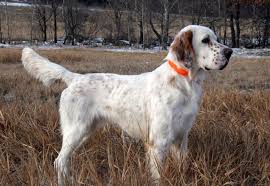 In 1983, my Dad gave me an English Setter puppy out of Walter, a great setter and family pet. We named him Hunter.

But this was the skitziest dog I had ever seen. He was super-hyper and deathly afraid of the trash men who used to pick up our trash cans from the back deck. I thought he would be gun shy for sure and he was so wild when you let him go, I wondered if I would ever see him again if I took him hunting. So I hunted my other setter to be safe.

One December afternoon, I decided it was time to find out if Hunter could hunt. So I put him on a leash and drug him to the back of my Chevy Pick-up with a camper top. When I closed the door, Hunter was going crazy, racing back and forth in the bed of the truck. I thought he might have a heart attack before I could make the short drive to a spot just out of town that had several coveys of quail. I kept watching my over-the-top setter in the rear-view mirror and saw him circling in the back.

Unfortunately, Hunter was doing the latter. He did it and did it and did it some more. When dogs are penned, they hold it until they are loose, and then unload. Hunter had truly unloaded all over the bed of my pick-up. When I got to the field, I gingerly opened the back door and Hunter – and other stuff – came barreling out. I managed to catch him and lead him to a small creek and bathed him as best I could. Then he was off to the races and a covey of quail got up and flew up into a hollow.

I managed to get Hunter in the area and a single bird flew. I shot it down and led Hunter to the dead bird. He sniffed it, picked it up and then gave it back to me and that was all it took. A minute later, he winded another single and went on point like a seasoned veteran. I shot that bird and another. He fetched them both without ruffling a feather and we moved on.

We later found two more nice coveys and Hunter pointed both the coveys and the singles. I finished with a limit of 8 quail and went back to the truck. This time, I put Hunter in the front seat with me. He had earned the right, and this time – tired out from the hunt – he put his head in my lap and did take a nap.

Hunter turned out to be not only the best bird dog I have ever owned, but the best I have ever seen. He never, ever busted a quail, but pointed every single one and he held until I kicked them up. Sometimes I had to go deep in the thickets to even find him, holding steady on point.

Hunter, as are many white setters, was deaf in one ear and when I called, it confused him and he often ran in the opposite direction, so I stopped calling and whistling. He would use his nose to find me and we enjoyed many silent hunts together.

Cleaning up the back of my pick-up at the car wash turned out to be a small price to pay. For the record, always let a bird dog run around the yard first, before he gets in the truck. That’s good information.

I am Jim Brewer, Editor of the new CvilleBuzz, a humble on-line attempt to entertain those, not only … END_OF_DOCUMENT_TOKEN_TO_BE_REPLACED