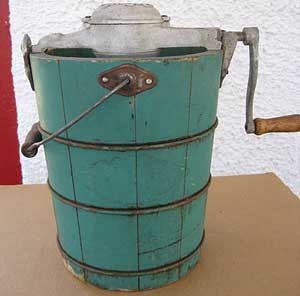 As summer winds down, memories of summers past come to mind. One that stands out for many Boomers is that of a family gathering around a White Mountain Freezer to churn some homemade ice cream.

In our family, making a batch of homemade ice cream was an event unto itself, almost holiday-ish in significance.

I remember summer evenings at Grandma Brewer’s house with lots of aunts, uncles and cousins on hand. Dinner was over, the dishes were washed and put away and at least one uncle was off to the store for a 20-pound bag of ice. Soon, Grandma Brewer brought the six-quart canister of cream, sugar, vanilla, eggs and peaches out on the porch and the kids begged for turns at the cranking chair.

At first, it was easy. The crank rotated almost effortlessly. Then, more rock salt was added to the ice, which began to melt faster and draw heat from the ice cream mixture, which began to freeze.

Now it took a very large cousin or two smaller ones to sit on the lid of the freezer and hold it still while the strongest cousin cranked.

Ultimately, an uncle or two came in as designated crankers, until even they could no longer move the dasher through the now thick and frozen ice cream.

It was done!
But, there was an unwritten rule somewhere that the ice cream had to sit a spell and firm up – after the dasher was removed, of course. Kids immediately huddled around the dripping dasher for a finger or spoonful of ice cream. Boy, was that stuff good!

Finally, Grandma Brewer announced that the bowls and spoons were on hand and to dig in.

And did we ever. The ice cream was so yummy we instantly devoured our bowls of the creamy mixture, which caused something of a problem. The ice cream was so cold that it seemingly made our brains freeze. Ice cream headaches were common in those days and the only cure was to wait a few minutes, let your head stop aching and then resume the devouring process.

With “seconds” and sometimes “thirds”, we ate the ice cream until it was gone, not a trace or a drop remaining in the canister.

Almost all the freezers in those days were made by White Mountain, a New England Company that went in business in 1853. The freezers were sturdy, made of high quality metal and wood, tightly secured with heavy bands. They were built to last. In fact, many of the White Mountain Freezers used throughout the 1940’s, 50’s and 60’s are still operational.

Today, most ice cream freezers are electric and they do the job, I suppose, but they sure make an awful racket. Cousins playing hide-and-seek, Grandmas and Grandpas bragging on their grandchildren and uncles discussing politics on the front porch were far more pleasant sounds.

I am Jim Brewer, Editor of the new CvilleBuzz, a humble on-line attempt to entertain those, not only … END_OF_DOCUMENT_TOKEN_TO_BE_REPLACED