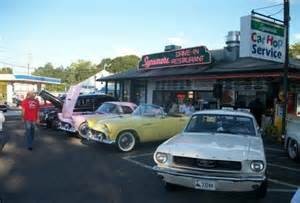 How do young people meet these days? Kids don’t have weekend dances. There are there no more drive-in movies and there are no drive-in restaurants – no place to circle the parking lot looking for girls, or boys, as the case may be. Boomers look back nostalgically at the days when a young lady called a carhop would take your order for a frosted mug of root beer and an order of fries. You’d give her two quarters and get change.

The term carhop originated when cars in the 30’s and 40’s had running boards and the waiters would frequently “hop on” the cars and ride to the selected parking spot. They would take the order and sometimes hop on another available running board for a ride back to the kitchen. Later, attractive young ladies would lace up roller skates and speed from car to car on that form of transportation. Mostly, carhops just walked from car to car, taking orders, and a pile of grief from teenage boys.

Many small and mid-size towns had several drive-ins, usually a few miles apart. A typical, dateless Friday evening for young men included multiple trips to each drive in to see if any new “chicks” had arrived. After any spare change had been spent at a given drive-in, the young Boomers were suddenly without funds, and ordered water, which the carhops hated.

A typical car would have anywhere from 4 to 6 teenagers of the same sex packed in. A problem arose if one car had five boys while the other car held, for example, four unattached young ladies. But such problems were generally worked out with an intense game of rock, paper, scissors. Maybe the US Congress ought to try that solution at the next budget crisis?

In the 1950’s and 60’s, there was no such thing as fast food. Sure, there were burgers and dogs and scads of French fries, but the service was anything but fast. A half-hour wait was normal, but no one cared because as soon as you ate, you were out of money for the rest of the evening. But money went a lot farther back then. With two bucks, you could buy a couple gallons of gas for the weekend, with enough money left over for a ticket to the movies and a meal at the drive in. Add another buck if you had a date.

Milkshakes – hand made – were a popular item at the old drive ins. Other choice sections included ice cream sodas and cherry or vanilla Cokes. In those days, local drive ins didn’t have pizzas. The spicy pies would gain significant momentum in the late 60’s and early 70’s.

A few bucks in your pocket, an ironed pair of pegged pants, the Wolfman on the radio and a drive in restaurant? What Boomer can ever forget those days?

I am Jim Brewer, Editor of the new CvilleBuzz, a humble on-line attempt to entertain those, not only … END_OF_DOCUMENT_TOKEN_TO_BE_REPLACED