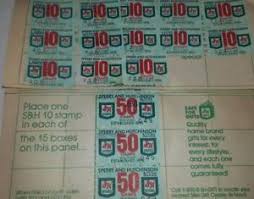 In today’s world of self-service, it’s hard to conceive that stores would actually give premiums to entice and retain customers. But Boomers clearly remember S & H Green Stamps and a national era of stamp collecting so profound that many people went around with green tongues from licking so many stamps.

In the 50’s and 60’s, filling stations not only put gas in your tank, but they also checked your oil, your tire pressure and washed your windshield, and almost everyone offered S & H Green Stamps.

S & H (Sperry and Hutchinson Company) Green Stamps dated back to the 1930’s, but the stamps really hit their stride after World War II. S & H sold the stamps in bulk to various retailers who in turn offered the stamps as premiums to customers with the intention of generating customer loyalty. At their peak of popularity, the stamps were such a powerful draw that customers would frequently steer their business only to stores that offered S & H Green Stamps.

Green Stamps were awarded as a bonus to shoppers based on the dollar amount of the sale. Some stores gave away a stamp for every 10-cents spent at retail, while others gave more, depending on the profit and mark-up of the items.

The stamps were indeed “green” and perforated just like a postage stamp. Collector books and a catalogue of prizes were available at participating stores and the goal of the shopping public was to fill up as many books as possible and redeem them for prizes. You could get just about anything with Green Stamps, from toasters to life insurance policies, but not everything was listed in the catalogue. You could actually negotiate with the company for various prizes. It is said that one school in Erie, Pennsylvania saved up 5.4 million Green Stamps in order to buy a pair of gorillas for the local zoo. There is no telling how many toasters, TV trays and sets of steak knives were earned from Green Stamp collections.

There were other stamp companies during those halcyon days of trading stamps, but none ever caught on like S & H Green Stamps.

The books in which the stamps were glued each had 24 pages. To fill a page required 50 points, so each book contained a total of 1200 points. Sounds like a lot, but it took a lot to get a decent prize. The more expensive the prizes, of course, the more books it took to redeem them.

Typically, a 1950’s or 1960’s family would accumulate the stamps and store them in an old cigar box until the box was near overflowing. Then, maybe once a month, the family had a “licking party” while watching TV and each family member would lick away or soak the back of the stamps with enough liquid to make them adhere. If too much liquid was applied, the stamps wouldn’t stick and then it was a real problem.

According to a publicist for Sperry and Hutchinson, when the program reached its height in the mid 60’s, they were printing three times as many stamps as the US Postal Service. The Green Stamps catalogue was the largest single publication in the United States. It was estimated that 80 percent of US households collected stamps of one sort or another, creating an annual market for S&H alone of about $825 million.

For the most part, the premium stamp companies went out of business during the recessions of the 1970’s, but believe it or not, you can still redeem a book of S & H Green Stamps. The approximate value of each book today is about $1.20. For a plasma TV, you would need some 500 books, and that represents a lot of licking.

It is difficult to fathom that a modern gas station would give you something for shopping at their establishment. You’re lucky if they don’t raise the price of gas while you’re filling your tank. They even charge for air for your tires.

Perhaps someday, times will change. Perhaps we’ll even see the return of S & H Green Stamps as a way to say thank you for shopping at our business.

I am Jim Brewer, Editor of the new CvilleBuzz, a humble on-line attempt to entertain those, not only … END_OF_DOCUMENT_TOKEN_TO_BE_REPLACED