You are here: Home / Boomer Memories / Bonanza In Living Color 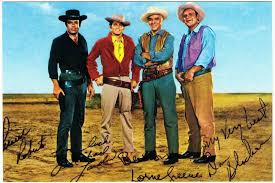 The modern generation is accustomed to innovation. In recent years, they have seen voice-activated television sets, we have cars that run on batteries, transplant surgeries that take less than an hour, drone delivered packages and a phone – small enough for a shirt pocket – that will take videos, guide travelers, spit out data like a water fountain and – yes – it’s a phone.

For our generation, changes were not so dramatic and each new innovation was met with wonder. Color TV, for example.

Many families in the late 50s were just getting used to black and white TVs. There were still unfilled slots in the afternoon with nothing on but music. You were lucky if your antennae would pick up more than one station and it took each TV several minutes to start because the tubes were cold.  And then RCA announced that it would be able to broadcast shows in – gasp – color.

At the time, hardly anyone owned a color TV, but with the RCA proclamation, they began selling like hot cakes as America awaited the chance to see a TV program in all the colors of a peacock. It would be like going to a movie with Technicolor!

The first real breakthrough in color broadcasting on network television was NBC’s Bonanza, when Ben, Hoss, Adam and Little Joe would ride into our living rooms. The mega-hit starring Lorne Greene as the patriarch of a Nevada ranching family premiered  on September 12, 1959 – in living color.

In Lewisburg , WV, Dave Gladwell’s Dad, Arthur, was one of the first to own a color set and Dave invited all of our gang over to watch Bonanza.

We sat spellbound as the black and white program before Bonanza faded out and the NBC Peacock appeared. It was in color. All the colors. This was revolutionary. We watched every programmed second, though many of the commercials were still black and white. As most know, Bonanza went on to run for 14 consecutive seasons and remained at or near the top of the ratings.

Color TVs were expensive, at first, but within 5 years you could buy one for less than a hundred bucks. It was 60 years ago this September, but it seems like just yesterday that we witnessed this electronic miracle.

We Owned the Streets

I am Jim Brewer, Editor of the new CvilleBuzz, a humble on-line attempt to entertain those, not only … END_OF_DOCUMENT_TOKEN_TO_BE_REPLACED