You are here: Home / Boomer Memories / Blowin’ In The Wind 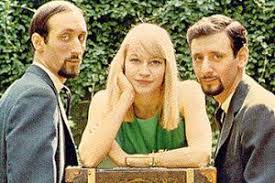 We were driving from Lewisburg, WV to enroll at UNC in Chapel Hill on a September day in 1962 when I first heard the group. The song was “Where Have All The Flowers Gone” sung by a group called Peter, Paul and Mary.

Boomers grew up with this trio, pioneers in folk music, which gained steam in the 1960s. To many, folk music meant protests and flower children. To me, it meant some of the greatest harmony ever to come across a radio. The unique harmony of Peter, Paul and Mary was special. Mary Travers was a deep alto, probably closer to a tenor, so when she sang with the real tenor, Peter Yarrow (the short one) and baritone Paul Stookey, the sound was incredible.

That fall, I was so taken with the music of Peter, Paul and Mary that I got a guitar and practiced playing “Stewball the Racehorse” until callouses formed on each finger of my left hand. I practiced and practiced and drove my suite mates crazy until finally I could reproduce (sort of) some of the haunting chords of Peter and Paul.

The trio formed in 1961 and it didn’t take them long to reach stardom. We saw them perform at Carolina in 1962 and after the concert they went to the DEKE house for a few beers and drinks. They were down to earth folks. And boy could they sing!

Their debut album featured “Lemon Tree”, “500 Miles”, “If I had a Hammer” and “Where Have All the Flowers Gone”. Remember those?

Later, they recorded blockbuster hits such as “Puff The Magic Dragon”, “Blowin’ in The Wind”, “Don’t Think Twice, It’s Alright”, “This Land is Your Land”, “Big Boat”, “Leaving On a Jet Plane”, “I Dig Rock and Roll Music”, “Cruel War” and others.

They sang as a group from 1961 till 1969, and then went their separate ways. The group reunited for several special concerts after that until Mary died at age 72 in 2009.

I hear them on the oldies station on the radio from time to time. Their songs just keep on keep on blowin’ in the wind. There has never been a group like them and there will never be again.

I am Jim Brewer, Editor of the new CvilleBuzz, a humble on-line attempt to entertain those, not only … END_OF_DOCUMENT_TOKEN_TO_BE_REPLACED