You are here: Home / Boomer Memories / Beware of Washing Machines 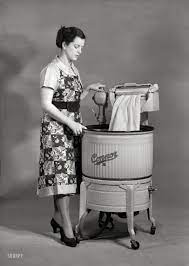 I don’t like washing machines. Never have. My earliest recollection of a washing machine was a big bucket-looking thing with ringers on top. I figured that if those ringers could squeeze the dirt out of blue jeans, they would mash hell out of small fingers. So I avoided washing machines at all costs.

Later, of course, my family owned newer, more modern washing machines, and even electric clothes dryers. My only dealings with these appliances, however, was to drag my dirty laundry to the utility room, and magically, my clothes would show back up in my room, clean and pressed.

When I went to Carolina, it was even easier. Just stick all your dirty stuff in a laundry bag, take it down to the dorm basement and check it in. In two days, starched and pressed shirts would appear along with spiffy clean underwear and sorted socks.

I had a bit of a problem in my bachelor days after college and had to actually go to a (shudder) laundromat with a pocketful of quarters. There was generally a nice lady there who would advise on soaps, the right amount and whether a pair of red golf trousers could go in the same wash with a white dress shirt.

When I married, my washing machine headaches went away. My wife Nancy, I think, really likes to do laundry. Every day, it seems, she snatches up any dirty clothes I may have worn and does a load of laundry. And almost every day there is a stack of my clean clothes at the end of the bed, so she does a lot of laundry.

Now, I don’t mind putting clothes in the dryer, folding clothes that come out of the dryer or carrying them upstairs, but I want no part of that washing machine. I wouldn’t even know how to turn it on or where the quarters go.

Then it dawned on me. What if something happened to Nancy?  I figure I have enough shirts and trousers to last a month or more, but at last count, I only had about a dozen undershorts. That means I’d either have to buy a pile of new boxers, go to a laundromat (out of the question) or remarry within two weeks, which would be difficult to explain to my children.

There happens to be a very nice lady across the street who actually owns a laundromat and she is single. If I married her, I would be saved from washing machines for life. That has been my Plan B for the last 5 years, then last week she sold her business. Now what?

I suppose I’ll eventually have to go downstairs and deal with our washing machine. At least it doesn’t have ringers.

I am Jim Brewer, Editor of the new CvilleBuzz, a humble on-line attempt to entertain those, not only … END_OF_DOCUMENT_TOKEN_TO_BE_REPLACED