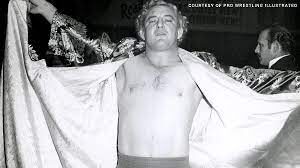 When we moved to Beckley, WV, our neighbors on the corner were Buddy and Bertel Turner. An older couple, they took us under their wing. I remember Buddy having chickens and I was able to watch the chicks peck out of their eggshells under a heat lamp. I’ll never forget that. Bertel was often my babysitter when Mom and Dad went to Saturday night dances at the country club.

I loved it when Bertel came to sit because she let me stay up late and watch wrestling matches. She was addicted. She hissed at the bad guys and cheered wildly when the good guys got a pin and we both were certain that wrestling was real, not fake.

In the 1950’s, TV networks were starved for programming, any programming. There were lots of Boxing Matches in those days as well as Professional Wrestling. It was made for TV entertainment – no production problems, just turn on the cameras and film. In the wrestling matches, there was always one good guy or team, if it was a tag team event, and one or more villains. One of the great villains was “Gorgeous” George, a pretty boy, but a bad character. Bertel hated him. Booed his every move, but he won a lot of matches.

“Gorgeous” George Wagner took on his glamour boy image in the 1940’s. When the announcer introduced him as “Gorgeous George,” he strutted around the ring like a peacock and antagonized fans with his over-the-top effeminate behavior That type of showmanship was unheard of and fans flocked to his matches to ridicule and root against him. When he appeared on TV, ratings went through the roof.

“Gorgeous” George turned his ring entrance into a spectacle that would often take up more time than his actual matches. He entered the ropes to “Pomp and Circumstance”, followed by a purple spotlight. He donned an elegant robe with an array of sequins. He was always escorted down a personal red carpet by his ring valet “Jeffries”, who carried a silver mirror while spreading rose petals at his feet. While Wagner removed his robe, Jeffries would spray the ring with disinfectant, ostensibly Chanel No. 5  perfume before the match. Once the match began, George would cheat in every way possible and infuriated the crowd. His credo was “Win if you can, lose if you must, but always cheat!”

He was quite the showman and influenced another athlete, a boxer by the name of Cassius Clay, also a self-promoter. Clay (Muhammed Ali) later said that he didn’t care if fans hated or loved him, so long as they came to see him fight.

When “Gorgeous” George came on TV, Bertel Turner and I sat spell bound, and we were always entertained.

I am Jim Brewer, Editor of the new CvilleBuzz, a humble on-line attempt to entertain those, not only … END_OF_DOCUMENT_TOKEN_TO_BE_REPLACED