You are here: Home / Backyard Birds and Buds / Whitey The Goldfish 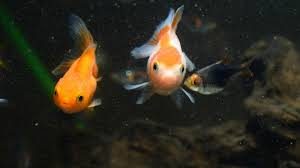 Most goldfish, I suppose, are gold. That’s how they got their names, but we have a goldfish who apparently wasn’t happy with his birth-color and has decided to turn white.

We call him (ta-dah) Whitey.

Whitey and his seven friends are rescue goldfish. Let me explain.

About three years ago, I went on an early spring crappie fishing trip to Lake Orange and stopped at a bait shop for a dozen minnows. The bait-meister said he was out of regular, shiner minnows, but he had some goldfish minnows that he claimed were irresistible to crappie. Maybe so, but they weren’t irresistible to Lake Orange crappie I was to find out. I didn’t get a bite. At the end of the day I had eight of the 12 goldfish remaining in my minnow bucket and was about to dump them in the lake when I considered recycling the minnows.

If I put them in Nancy’s lily pond and I decided to go again, I could just dip them out and I’d have some minnows.

So I did – dump them in Nancy’s lily pond, that is.

The shriek heard round the neighborhood the following morning was when my wife discovered the intruders.

I tried explaining my plan to recycle the minnows and that they would soon be gone, but after she had fed them for a few days, and given them Christian names, my baitfish had officially become pets.

Later, Nancy moved the little fellows (not much more than an inch) to her aerated fishpond where they live to this day, except they are growing like weeds. Whitey and his buds are about 4- or 5-inches – and still growing.

Whitey was a regular goldfish until early this summer when he took on a few white spots. He is mostly white now with a few orange patches. I asked him why he is changing colors and he wouldn’t say. A goldfish secret, I presume.

It’s funny. If you go and buy expensive Koi or other exotic fish for your pond, they will either go belly-up or an egret or raccoon will discover your stash and eat high on the hog. But if you pay a nickel apiece for your fish – they live forever. We have not lost a single goldfish.

I don’t think Whitey and friends are pure-breds, just lowly members of the carp family. The largest of their kind grew to about 18-inches. We’ll have to get a bigger pond if they reach that size.

But the fish seem happy. There are no bass lurking in the shadows to gulp them down and they will never feel the pinch of a barbed hook. We also have a screen cover, so they are protected from out-of-the-water predators. They live in a heated pond and are fed daily. What a life for a bunch of rescues!

All in all, they’re fun to have around.

Plant a Butterfly Bush (Milkweed, Too)

The Life of a Fiddler Crab

I am Jim Brewer, Editor of the new CvilleBuzz, a humble on-line attempt to entertain those, not only … END_OF_DOCUMENT_TOKEN_TO_BE_REPLACED