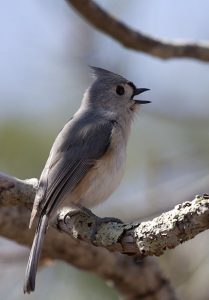 I hadn’t seen my resident pair of titmice in several weeks – I even commented to my wife Nancy that they were missing in action. The very next evening while I was smoking a cigar on the back patio and watching my birds, they flew to the feeder.  Two lovely, dainty titmice. They must have known I had missed them.

The official name, Tufted Titmouse, is quite a mouthful for such a small creature. Titmice are actually in the Chickadee family, though a bit larger – maybe 6-inches in length overall. They have relatively long tails, which adds to their size.

Titmice have black foreheads and a small crest, like a cardinal. Their song is enticing -“peter-peter-peter”- and easily identifiable.

My titmice are not migrators – I seem them throughout the year, though they sometimes take visits to parts unknown.

The little birds nest in excavated tree holes, or man-made boxes. Only once have they nested in any of my birdhouses and we were there the afternoon the four chicks fledged. That was amazing.

Another amazement from a titmouse is how they eat.

Particularly fond of sunflower or safflower seeds, a titmouse will fly to the feeder, snatch a seed, then make a beeline to a nearby limb. With one foot clinging to the limb, the bird holds the seed in the other foot and deftly pecks away until the heart is exposed, which he also pecks into smaller pieces, and he never ever spills any parts of the seeds. A cardinal, on the other hand, separates the heart from the shell entirely in his mouth.

Birds are neat creatures, and especially the titmice.

Love Is In the Air

I am Jim Brewer, Editor of the new CvilleBuzz, a humble on-line attempt to entertain those, not only … END_OF_DOCUMENT_TOKEN_TO_BE_REPLACED