You are here: Home / Backyard Birds and Buds / The World of Bluebirds 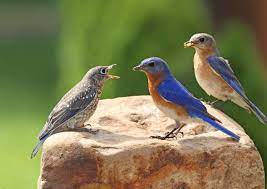 In the world of bluebirds there is only one thing predictable – and that is they are totally unpredictable. Each family that visits and nests in our yard is different.

We have been blessed with bluebirds for a number of years and in only one year did they not nest somewhere in our backyard.

The main reason we have bluebirds is fresh water. We maintain several birdbaths and that attracts bluebirds. They love to bathe and splash in fresh water. When they built their first nest in a small, ornamental gourd hanging from what was once our clothesline pole, I began feeding them – first meal worms and then sunflower hearts. Mary at the old bird shop at Rio Hill said that both the adult birds and the baby chicks could eat and digest sunflower hearts, so since then, I have maintained such a feeder. Now, the lovely birds hang out around here pretty much year round.

Last summer, a family of bluebirds nested twice, both times successfully, but I believe something happened to the hen after that. All through the fall, winter and early spring, I saw the male with a pair of his offspring, but no female. Then, finally, a mature female appeared. Bluebirds will mate for life, but if a male loses his partner, he immediately seeks another, sometimes finding a new mate within a few hours.

The pair inspected and visited their usual house at the top of my garden cage, but I didn’t know she had gone on the nest until four little bluebirds popped out early one morning. As far as I know, all four have survived, but the adult bluebirds then changed houses, selecting one near where we sit in the afternoons at the pond. The hen is very skitzy and doesn’t much care for humans while the male will practically land on my shoulder when I feed him and his family. The female is still on the nest, but I expect the young ones to hatch within the week for sure.

I am prepared with 7,000 mealworms in the refrigerator. In the world of bluebirds, they won’t last long with all those hungry mouths to feed.

I am Jim Brewer, Editor of the new CvilleBuzz, a humble on-line attempt to entertain those, not only … END_OF_DOCUMENT_TOKEN_TO_BE_REPLACED